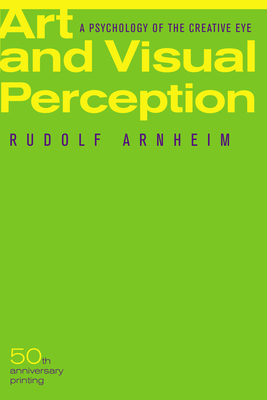 A Psychology of the Creative Eye

Since its publication fifty years ago, this work has established itself as a classic. It casts the visual process in psychological terms and describes the creative way one's eye organizes visual material according to specific psychological premises. In 1974 this book was revised and expanded, and since then it has continued to burnish Rudolf Arnheim's reputation as a groundbreaking theoretician in the fields of art and psychology.

Praise For Art and Visual Perception, Second Edition: A Psychology of the Creative Eye…

"Definitive. . . . translated into fourteen languages, it is one of the most widely-read and influential art books of the century."
— Leonardo

"The clear, direct, flexible writing is powerfully reinforced by the numerous illustrations . . . not one of which is superfluous."
— Journal of Aesthetics and Art Criticism

"A book which reflects so well the author's urbanity, catholicity, and keenness of mind, as well as his technical grasp of the scientific and the artistic, is no small achievement."
— Psychological Bulletin

"In this much-needed book, the author brings together the results of good thinking in areas, heretofore, comparatively removed from one another."
— Audio-Communication Bulletin

"The author starts with a kernel of hard-boiled psychological fact . . . as a landing platform for a soaring stratospheric flight into a beautiful, amorphous sky."
— Quarterly Review of Biology

Rudolf Arnheim is Professor Emeritus of the Psychology of Art at Harvard University. His books include Film as Art (California, 1957), Visual Thinking (1969), The Dynamics of Architectural Form (California, 1977), The Split and the Structure: Twenty-eight Essays (California, 1996).
Loading...
or support indie stores by buying on