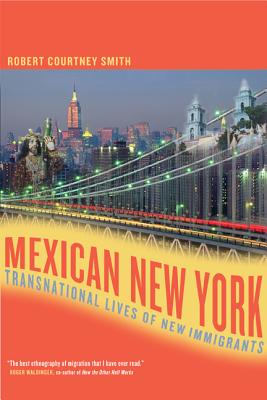 Drawing on more than fifteen years of research, Mexican New York offers an intimate view of globalization as it is lived by Mexican immigrants and their children in New York and in Mexico. Robert Courtney Smith's groundbreaking study sheds new light on transnationalism, vividly illustrating how immigrants move back and forth between New York and their home village in Puebla with considerable ease, borrowing from and contributing to both communities as they forge new gender roles; new strategies of social mobility, race, and even adolescence; and new brands of politics and egalitarianism.

Smith's deeply informed narrative describes how first-generation men who have lived in New York for decades become important political leaders in their home villages in Mexico. Smith explains how relations between immigrant men and women and their U.S.-born children are renegotiated in the context of migration to New York and temporary return visits to Mexico. He illustrates how U.S.-born youth keep their attachments to Mexico, and how changes in migration and assimilation have combined to transnationalize both U.S.-born adolescents and Mexican gangs between New York and Puebla. Mexican New York profoundly deepens our knowledge of immigration as a social process, convincingly showing how some immigrants live and function in two worlds at the same time and how transnationalization and assimilation are not opposing, but related, phenomena.

Robert Courtney Smith is Associate Professor of Sociology, Immigration Studies and Public Affairs, School of Public Affairs, Baruch College, and Graduate Center, City University of New York. He is the coeditor of Migration, Transnationalization, and Race in a Changing New York (2001). He is cofounder of the Mexican Educational Foundation of New York, a 501c(3) organization.
Loading...
or support indie stores by buying on