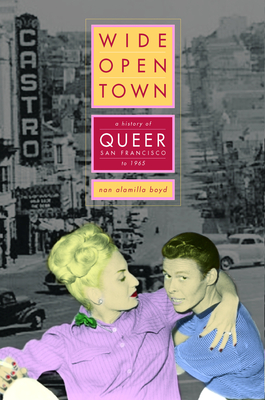 A History of Queer San Francisco to 1965

Wide-Open Town traces the history of gay men and lesbians in San Francisco from the turn of the century, when queer bars emerged in San Francisco's tourist districts, to 1965, when a raid on a drag ball changed the course of queer history. Bringing to life the striking personalities and vibrant milieu that fueled this era, Nan Alamilla Boyd examines the culture that developed around the bar scene and homophile activism. She argues that the communities forged inside bars and taverns functioned politically and, ultimately, offered practical and ideological responses to the policing of San Francisco's queer and transgender communities. Using police and court records, oral histories, tourist literature, and manuscript collections from local and state archives, Nan Alamilla Boyd explains the phenomenal growth of San Francisco as a "wide-open town"—a town where anything goes. She also relates the early history of the gay and lesbian civil rights movement that took place in San Francisco prior to 1965.

Wide-Open Town argues that police persecution forged debates about rights and justice that transformed San Francisco's queer communities into the identity-based groups we see today. In its vivid re-creation of bar and drag life, its absorbing portrait of central figures in the communities, and its provocative chronicling of this period in the country's most transgressive city, Wide-Open Town offers a fascinating and lively new chapter of American queer history.


Praise For Wide-Open Town: A History of Queer San Francisco to 1965…

"San Francisco is known internationally as a progressive city with an atmosphere of openness and tolerance, the perfect environment in which to nurture a diverse homosexual culture and community. Wide-Open Town explains how it came to be that way. By exploring more than six decades of San Francisco's queer street life, the book also reveals the often-overlooked role that bars and public spaces played in the development of sexual-identity-based politics."
— San Francisco Chronicle

“The book is deeply informed and enlivened by 42 oral histories she [Boyd] gathered with lesbians and gay men who have lived in San Francisco since the 1930s . . . and this terrific material allows Boyd to explore topics that have traditionally been ignored by gay historians. . . . Boyd has a keen ear for distinctive details, and it is this . . . that drives this welcome study."
— Publishers Weekly

"Boyd's book will become a strong voice in the growing chorus that seeks, not to dethrone the riots at the Stonewall Inn as a defining event in the history of the LGBT social movement, but to provide much greater nuance to our understanding of that movement, especially outside of New York City and before 1969. . . . Wide-Open Town, by giving us a history of queer San Francisco, fills a glaring hole in LGBT historiography—we needed a queer history of the nation's queerest city."
— Journal of American History

"Boyd's work is the latest addition to a series of place-based studies by historians and anthropologists as well as geographers and urbanists . . . that take their particular locations as the frame for detailed explorations of social relations, politics, and culture. . . . To embark on any such project is a bold move. But to take up San Francisco was particularly brave, given the many already available accounts of queer San Francisco. . . . . All of these and many other materials have contributed to San Francisco's status as the imagined homeland of various LGBT and queer nations, or as the gay 'mecca' as the city has been called. Such predecessors—not to mention such a status—are a lot to live up to, Nan Boyd succeeds admirably at her task, and leaves me hoping for more."
— Women's Review of Books

"Wide-Open Town joins a growing set of classics, such as George Chauncey's Gay New York and Garry Wotherspoon's City of the Plain, that give us a more finely grained and nuanced account of how queer people have come into being. These city histories offer important evidence for some of the central questions of queer studies: how and why LGBT identities formed and came together as quasi-ethnic communities; how state and capital have shaped the formation of (LGBT) civil society; how people subjected to formidable degrees of state suppression nevertheless found ways to consolidate themselves, resist, and reshape the larger society; and how sexuality changed with each historical period."
— Journal of the History of Sexuality

"Nan Alamilla Boyd's account is an invaluable contribution to U.S. queer history, as well as to oral history, California history, the history of sexuality, class, and gender and to the literature connecting formal and informal political resistance."
— Oral History Review

"Wide-Open Town is a well-researched and well-written history of an essential topic that manages to be scholarly without being dull. To those who came of age after Stonewall, this book is a vivid look at a bygone era, and of the women and men who made gay San Francisco what it is today."
— Gay Today

"In its vivid re-creation of bar and drag life, its absorbing portraits of central figures in the communities, and its provocative chronicling of this period in the country's most transgressive city, Wide-Open Town offers a fascinating and lively new chapter in American queer history."
— Pink Pages

“For anyone interested in as-yet-untold queer history, this is a must-read.”
— New York Blade

Nan Alamilla Boyd is Assistant Professor of Women's and Gender Studies at Sonoma State University.
Loading...
or support indie stores by buying on