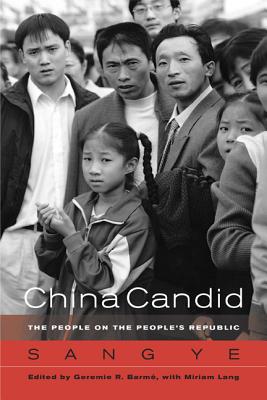 The People on the People's Republic

Leading Chinese journalist Sang Ye follows his successful book Chinese Lives with this collection of absorbing interviews with twenty-six men, women, and children taking the reader into the complex realities of the People's Republic of China today. Through intimate conversations conducted over many years, China Candid provides an alternative history of the nation from its founding as a socialist state in 1949 up to the present. The voices of people who have lived under—and often despite—the Communist Party's rule give a compelling account of life in the maelstrom of China's economic reforms—reforms that are being pursued by a system that remains politically rigid and authoritarian. Artists, politicians, businessmen and -women, former Red Guards, migrant workers, prostitutes, teachers, computer geeks, hustlers, and other citizens of contemporary China all speak with frankness and candor about the realities of the burgeoning power of East Asia, the China that will host the 2008 Olympics. Some discuss the corrosive changes that have been wrought on the professional ethics and attitudes of men and women long nurtured by the socialist state. Others recall chilling encounters with the police, the law courts, labor camps, and the army. Providing unique insight into the minds and hearts of people who have firsthand experience of China's tumultuous history, this book adds invaluable depth and dimension to our understanding of this rapidly changing country.

Sang Ye divides his time between China and Brisbane, Australia. His most recent book is The Year the Dragon Came (1996). Geremie R. Barmé is a Professor of Chinese History at the Research School of Pacific and Asian Studies at The Australian National University. He is the author of An Artistic Exile: A Life of Feng Zikai (California, 2002), In the Red: On Contemporary Chinese Culture (1999), and Shades of Mao: The Posthumous Cult of the Great Leader (1996). Miriam Lang is a researcher and translator based at Monash University in Melbourne.
or support indie stores by buying on
Copyright © 2020 American Booksellers Association