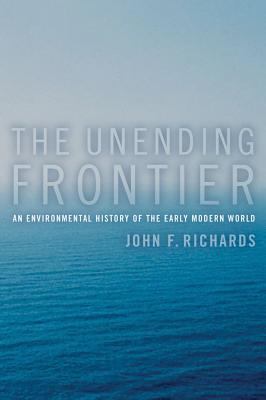 It was the age of exploration, the age of empire and conquest, and human beings were extending their reach—and their numbers—as never before. In the process, they were intervening in the world's natural environment in equally unprecedented and dramatic ways. A sweeping work of environmental history, The Unending Frontier offers a truly global perspective on the profound impact of humanity on the natural world in the early modern period.

John F. Richards identifies four broadly shared historical processes that speeded environmental change from roughly 1500 to 1800 c.e.: intensified human land use along settlement frontiers; biological invasions; commercial hunting of wildlife; and problems of energy scarcity. The Unending Frontier considers each of these trends in a series of case studies, sometimes of a particular place, such as Tokugawa Japan and early modern England and China, sometimes of a particular activity, such as the fur trade in North America and Russia, cod fishing in the North Atlantic, and whaling in the Arctic. Throughout, Richards shows how humans—whether clearing forests or draining wetlands, transporting bacteria, insects, and livestock; hunting species to extinction, or reshaping landscapes—altered the material well-being of the natural world along with their own.

John F. Richards is Professor of History at Duke University. He is the author of The Mughal Empire (1993) and Mughal Administration in Golconda (1975) and the editor of Land, Property and the Environment (2001). He is coeditor of World Deforestation in the Twentieth Century (1988) and Global Deforestation and the Nineteenth-Century World Economy (1983).

“Richards steers a calm course between these extremes [of the catastrophic and the celebratory view of environmental history], but it is as clear from his choice of examples as from his language that he inclines more to the celebratory than the apocalyptic view. . . . Richards advances beyond a purely Eurocentric approach to the dynamics of change and presents the frontier as an evolving, interactive process influenced by both human and non-human factors. That is no mean achievement.”
— Times Literary Supplement

“Richards has an economical way of surveying vast amounts of evidence which makes it an easy and rewarding read.”
— Felipe Fernandez-Armesto,

“This is a major work of world and environmental history that experts and nonexperts will be consulting and quoting for years to come.”

“This is more than a good textbook for a world history course. . . . It is a work that should be required reading for all early modernists, because it makes the strongest case to date for the importance of environmental history to the broader field.”

“An excellent addition to the literature of world environmental history and a valuable aid to teaching.”
— International History Review

“Richards’s book is an admirable success and an intellectual adventure. Completely dependable in its scholarship, it undoubtedly will be one of the few that environmental historians place on a shelf within reach for ready consultation. . . . All in all, this work is a masterpiece that will stand the test of time.”