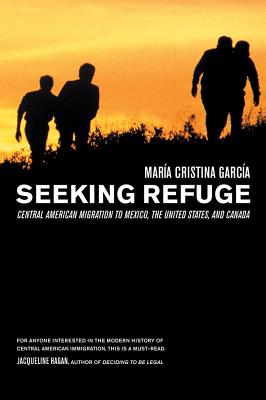 Central American Migration to Mexico, the United States, and Canada

The political upheaval in Nicaragua, El Salvador, and Guatemala had a devastating human toll at the end of the twentieth century. A quarter of a million people died during the period 1974-1996. Many of those who survived the wars chose temporary refuge in neighboring countries such as Honduras and Costa Rica. Others traveled far north, to Mexico, the United States, and Canada in search of safety. Over two million of those who fled Central America during this period settled in these three countries.

In this incisive book, María Cristina García tells the story of that migration and how domestic and foreign policy interests shaped the asylum policies of Mexico, the United States, and Canada. She describes the experiences of the individuals and non-governmental organizations—primarily church groups and human rights organizations—that responded to the refugee crisis, and worked within and across borders to shape refugee policy. These transnational advocacy networks collected testimonies, documented the abuses of states, re-framed national debates about immigration, pressed for changes in policy, and ultimately provided a voice for the displaced.

García concludes by addressing the legacies of the Central American refugee crisis, especially recent attempts to coordinate a regional response to the unique problems presented by immigrants and refugees—and the challenges of coordinating such a regional response in the post-9/11 era.

"This book is a very solid contribution to migration studies. Its comparative approach allows the evaluation of different countries' migration policies and other actors in civil society, such as NGOs, religious and professional groups helping refugees."
— Social Forces

“In this clearly written and engaging treatise, Garcia posits that the United States, Mexico, and Canada reacted to the Central American refugee crisis (1974-1996) on the basis of each state's interest, as well as a consequence of each others' actions. She also pays substantial attention to the grassroots movements and advocacy networks that pushed the agenda on the table in each of these three countries.”
— American Studies

"Maria Cristina Garcia's book eloquently explains the various factors that shaped the experience of over two million Central American refugees in Mexico, the United States, and Canada from 1970 to the 1990s."
— American Historical Review

“Garcia's greatest contribution is to place between the covers of one book an intricately detailed and meticulously documented comparative study in the broadest sense of the word—explicitly comparative in the three contexts of reception, and implicitly comparative regarding the three groups of refugees and migrants. . . . Both academic readers and the general public should be grateful to Maria Cristina Garcia for venturing on to regional territory and painting a variegated picture of a central saga in recent refugee history.”
— Journal of Latin American Studies

“Garcia’s book will satisfy scholars, serve students of the region, and provide a useful resource for policy-makers.”
— International History Review

“Garcia’s accessible and engaging study makes an important contribution to the literature on Central American history and migration in the context of Mexico, the United States, and Canada.”
— Social Development Issues

María Cristina García is Associate Professor of History at Cornell University and the author of Havana USA: Cuban Exiles and Cuban Americans in South Florida, 1959-1994 (California, 1996).
or support indie stores by buying on