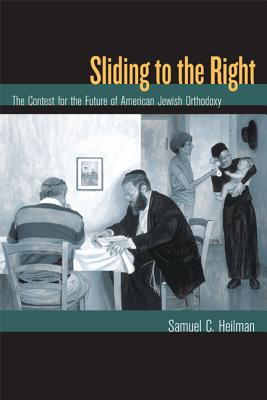 Sliding to the Right

The Contest for the Future of American Jewish Orthodoxy

Written by one of this country’s leading experts on American Judaism, this book offers a snapshot of Orthodoxy Jewry in the United States, asking how the community has evolved in the years since World War II and where it is headed in the future. Incorporating rich details of everyday life, fine-grained observations of cultural practices, descriptions of educational institutions, and more, Samuel Heilman delineates the varieties of Jewish Orthodox groups, focusing in particular on the contest between the proudly parochial, contra-acculturative haredi Orthodoxy and the accomodationist modern Orthodoxy over the future of this religious community. What emerges overall is a picture of an Orthodox Jewry that has gained both in numbers and intensity and that has moved farther to the religious right as it struggles to define itself and to maintain age-old traditions in the midst of modernity, secularization, technological advances, and the pervasiveness of contemporary American culture.

Samuel C. Heilman is Distinguished Professor of Sociology and holds the Harold M. Proshansky Chair in Jewish Studies and Sociology at the City University of New York. He is also on the faculty of Queens College, CUNY. Heilman is the author of When a Jew Dies: The Ethnography of a Bereaved Son (California, 2002), winner of the National Jewish Book Award and the Koret Jewish Book Award; Defenders of the Faith (California, 1999); and Synagogue Life (1998), among other books.
Loading...
or support indie stores by buying on