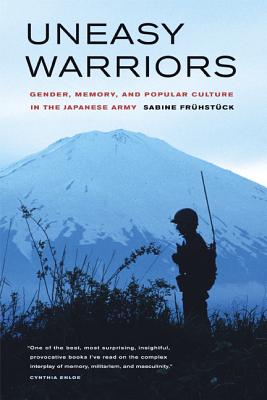 Gender, Memory, and Popular Culture in the Japanese Army

Following World War II, Japan's postwar constitution forbade the country to wage war or create an army. However, with the emergence of the cold war in the 1950s, Japan was urged to establish the Self-Defense Forces as a way to bolster Western defenses against the tide of Asian communism. Although the SDF's role is supposedly limited to self-defense, Japan's armed forces are equipped with advanced weapons technology and the world's third-largest military budget. Sabine Frühstück draws on interviews, historical research, and analysis to describe the unusual case of a non-war-making military. As the first scholar permitted to participate in basic SDF training, she offers a firsthand look at an army trained for combat that nevertheless serves nontraditional military needs.

Praise For Uneasy Warriors: Gender, Memory, and Popular Culture in the Japanese Army…

“Well-observed, thoughtfully analyzed portrait of the military. . . . A must read in the canon of recent ethnographies of Japan.”
— Amy Borovoy

“An important and thoroughly enjoyable contribution to the field of Japanese studies . . . An enlightening book.”
— Beatrice Trefalt

Sabine Frühstück is Professor of Modern Japanese Cultural Studies at the University of California, Santa Barbara, and the author of Colonizing Sex: Sexology and Social Control in Modern Japan (UC Press, 2003).
Loading...
or support indie stores by buying on