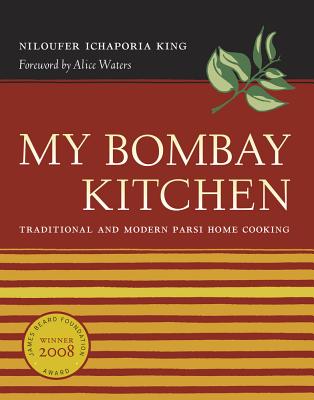 The Persians of antiquity were renowned for their lavish cuisine and their never-ceasing fascination with the exotic. These traits still find expression in the cooking of India's rapidly dwindling Parsi population—descendants of Zoroastrians who fled Persia after the Sassanian empire fell to the invading Arabs. The first book published in the United States on Parsi food written by a Parsi, this beautiful volume includes 165 recipes and makes one of India's most remarkable regional cuisines accessible to Westerners. In an intimate narrative rich with personal experience, the author leads readers into a world of new ideas, tastes, ingredients, and techniques, with a range of easy and seductive menus that will reassure neophytes and challenge explorers.

“Answers a longstanding need in this country for documentation of the foodways of the Parsis, one of India’s many ethnic groups. This book, written with knowing wit by an author of Parsi origin and backed by a wealth of scholarship, may be the definitive volume on this great cuisine. [Exudes] lighthearted, breezy confidence from beginning to end without sacrificing its central mission of teaching readers how easy and satisfying it is to bring the genius of Parsi cuisine into their homes.”
— Madhur Jaffrey,

"Exuberant . . . the most delightful American cookbook in years. American? Well, where else could it have been conceived and delivered?"
— New York Times

“The book easily transports readers to the household of the Ichaporia family in Bombay (now Mumbai) and submerges them in the scents and tastes of Parsi food. As talented a writer as she is a cook, the author manages this with charm (enhanced by old-time family photographs) but without sentimentality. Her approach to cooking is traditional in the manner of Parsi cooking over the centuries: absorbing new ideas and influences without losing its essential Indo-Persian character. . . . Interesting, reliable and beautifully written.”
— San Francisco Chronicle

"Melting-pot cuisine gets a star turn in Niloufer Ichaporia King's My Bombay Kitchen, which captures the cooking of one Parsi family. Parsis historically migrated from southern Persia (now Iran) to Gujarat in India, and the cuisine borrows liberally from Middle Eastern, colonial British, and colonial Portuguese tables. Goan rich pork stew is as much a staple as dals and chickpea stews; ginger-garlic pastes and dried red chilies abound."
— Boston Globe

“A lush memoir in the form of a cookbook . . . With pervading wit and droll sense of humor, she tells us what it means to be part of the 3,000-year-old Parsi culture, and how this plays out in a crazy amalgam of India and the West.. . . She brings alive culinary traditions, passed on through generations of beloved household cooks, mothers and grandmothers. This cooking may soon disappear. UNESCO projects that only 25,000 Parsis may exist in the world by 2020—one more reason to grab this extraordinary book and start cooking.”
— Patricia Unterman,

"King’s intimate tone, wit, and personal stories make us feel as if we’re right next to her, with her mother and her grandmother, cooking up dishes such as 100 almond curry or creamy paneer with walnuts and mint leaves. Drawing from Persian and Indian influences, King’s cookbook makes Parsi cuisine absolutely accessible, and is full of menus that range from easy to extravagant."
— Chow

“Essential reading for anyone to understand Parsi culture and cuisine. . . . She writes informatively and precisely, and she evokes the passion to cook.”
— Art Of Eating

“The headnotes are informative and entertaining, and the book concludes with a selection of menus, a detailed glossary, a source guide, and a bibliography. Highly recommended.” (Starred Review)
— Library Journal

“Once you get the hang of making [King's] ginger and garlic paste (which you can put in almost anything!), your cooking will never be the same.”
— Bloomberg News

“King could do for Indian cooking in America what Alice Waters and company did for the food of southern France.”
— San Francisco Magazine

“If you are a cook looking to expand your repertoire, a fan of reading cookbooks, or a social historian looking for some background information on Parsi culture—you can’t go wrong with My Bombay Kitchen! The recipes in this collection run from the sublime to the exotic, and you will be hard pressed not to discover several new favorites that you will find it impossible to do without.”
— History in Review

Niloufer Ichaporia King is an independent scholar.
Loading...
or support indie stores by buying on