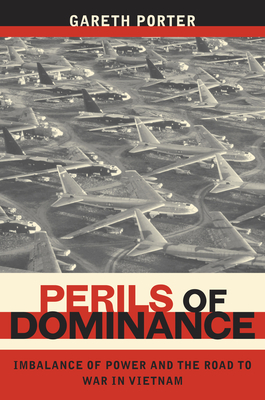 Imbalance of Power and the Road to War in Vietnam

Perils of Dominance is the first completely new interpretation of how and why the United States went to war in Vietnam. It provides an authoritative challenge to the prevailing explanation that U.S. officials adhered blindly to a Cold War doctrine that loss of Vietnam would cause a "domino effect" leading to communist domination of the area. Gareth Porter presents compelling evidence that U.S. policy decisions on Vietnam from 1954 to mid-1965 were shaped by an overwhelming imbalance of military power favoring the United States over the Soviet Union and China. He demonstrates how the slide into war in Vietnam is relevant to understanding why the United States went to war in Iraq, and why such wars are likely as long as U.S. military power is overwhelmingly dominant in the world.

Challenging conventional wisdom about the origins of the war, Porter argues that the main impetus for military intervention in Vietnam came not from presidents Kennedy and Johnson but from high-ranking national security officials in their administrations who were heavily influenced by U.S. dominance over its Cold War foes. Porter argues that presidents Eisenhower, Kennedy, and Johnson were all strongly opposed to sending combat forces to Vietnam, but that both Kennedy and Johnson were strongly pressured by their national security advisers to undertake military intervention. Porter reveals for the first time that Kennedy attempted to open a diplomatic track for peace negotiations with North Vietnam in 1962 but was frustrated by bureaucratic resistance. Significantly revising the historical account of a major turning point, Porter describes how Secretary of Defense Robert McNamara deliberately misled Johnson in the Gulf of Tonkin crisis, effectively taking the decision to bomb North Vietnam out of the president's hands.

Gareth Porter is an independent scholar on issues of war and peace and an historian of the Vietnam conflict. From 1974 through 1976, while still working on his PhD dissertation at Cornell University, he was Co-Director of the Indochina Resource Center, Washington, D.C., which carried out research on the war and lobbied for an end to U.S. military involvement in Indochina. His first book, A Peace Denied, which told the story of the negotiation and implementation of the Paris peace agreement of January 1973, was published in 1975. He edited a two-volume documentary history of the Vietnam Conflict from 1941 onward in 1979. His analysis of the political system of united Vietnam, Vietnam: The Politics of Bureaucratic Socialism, was published in 1993.
Loading...
or support indie stores by buying on