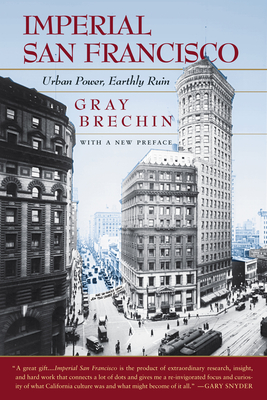 First published in 1999, this celebrated history of San Francisco traces the exploitation of both local and distant regions by prominent families—the Hearsts, de Youngs, Spreckelses, and others—who gained power through mining, ranching, water and energy, transportation, real estate, weapons, and the mass media. The story uncovered by Gray Brechin is one of greed and ambition on an epic scale. Brechin arrives at a new way of understanding urban history as he traces the connections between environment, economy, and technology and discovers links that led, ultimately, to the creation of the atomic bomb and the nuclear arms race. In a new preface, Brechin considers the vulnerability of cities in the post-9/11 twenty-first century.

"Students of Bay Area history will find much of value here, as will anyone concerned about the destructive ties between urban centers and nature beyond."
— San Francisco Chronicle

"For anyone who is sick and tired of the vast literature of L.A.-bashing, Imperial San Francisco will come as a refreshing surprise. Here is a book that fairly sizzles with outrage over water-grabs and land-grabs, “environmental blunders” and “the dynastic, corporate and political alliances that enable some cities to claim and acquire empires as their rightful due"—and yet the target is quaint and charming San Francisco rather than the customary urban whipping boy, Los Angeles. . . . Imperial San Francisco is an intentionally provocative work, and Brechin may not convince every reader that a “dark irrationality” underlies the glorious achievements of the pioneers who built the city in the first place. But no one who reads his book will ever look at quaint old San Francisco in quite the same way again."
— Los Angeles Times

"Part theory, part history, but with a whole lot of graft, sex and murder thrown in, Brechin has pioneered a genre: potboiler urban history."
— Oregonian

"Brechin presents a book rich in historical anecdotes, taking the reader from the gold rush to World War II, when UC Berkeley, which had been heavily financed by the Hearst family and other elites, oversaw aspects of the Manhattan Project. His insights on the propaganda of civic monuments prove provocative. The profiles of San Francisco's yellow journalists-Irving Murray Scott, Michael deYoung, and William Randolph Hearst-expose the ability of the press to communicate visions of empire, to indoctrinate the community in those visions, and to obscure the silent mechanisms of urban power that propelled those visions forward. Based on the portrait Brechin paints, one wonders if Orson Welles was too kind to Hearst."
— Environmental History

"Imperial San Francisco is written in an accessible manner, with clear graphic representation. The city grows, devours, and transforms the world as you read."
— Economic Geography

Gray Brechin has worked as a journalist and television producer and is coauthor of Farewell, Promised Land: Waking from the California Dream (UC Press). He received his Ph.D. from the U.C. Berkeley Department of Geography in 1998
Loading...
or support indie stores by buying on