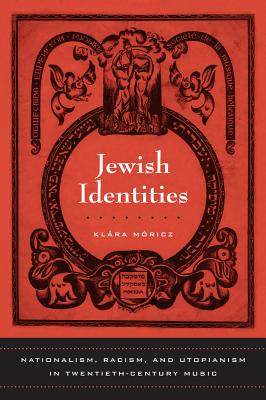 Jewish Identities mounts a formidable challenge to prevailing essentialist assumptions about "Jewish music," which maintain that ethnic groups, nations, or religious communities possess an essence that must manifest itself in art created by members of that group. Klára Móricz scrutinizes concepts of Jewish identity and reorders ideas about twentieth-century "Jewish music" in three case studies: first, Russian Jewish composers of the first two decades of the twentieth century; second, the Swiss American Ernest Bloch; and third, Arnold Schoenberg. Examining these composers in the context of emerging Jewish nationalism, widespread racial theories, and utopian tendencies in modernist art and twentieth-century politics, Móricz describes a trajectory from paradigmatic nationalist techniques, through assumptions about the unintended presence of racial essences, to an abstract notion of Judaism.

Klára Móricz is the Valentine Visiting Assistant Professor of Music at Amherst College. She is the editor of a forthcoming volume of the Béla Bartók Complete Critical Edition and a member of the editorial board of the Journal of American Musicological Society.
Loading...
or support indie stores by buying on