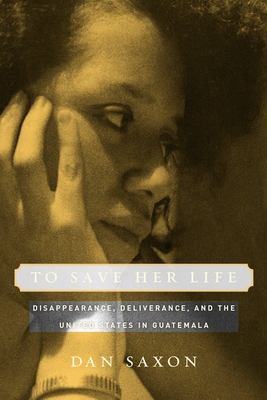 To Save Her Life (Paperback)

Disappearance, Deliverance, and the United States in Guatemala

Part human rights drama, part political thriller, part love story, this riveting narrative chronicles the disappearance of one woman as it tells the larger story of the past fifty years of violence and struggle for social justice and democracy, and U.S. intervention in Guatemala. Maritza Urrutia was abducted from a middle-class neighborhood while taking her son to school in 1992. To Save Her Life tells the story of her ordeal which included being interrogated in secret by army intelligence officers about her activities as part of a political opposition group. Chained to a bed, blindfolded, and deprived of sleep, Maritza was ultimately spared because her family was able to contact influential intermediaries, including author Dan Saxon, who was in Guatemala working for the Catholic Church's Human Rights Office. Here Saxon brings to life the web of players who achieved her release: the Church, the U.S. State Department, the U.S. Congress, numerous NGOs, guerrilla groups, politicians, students, and the media. Reaching back to 1954, when Maritza's grandparents were activists, the book is a study of the complex and often cruel politics of human rights, and its themes reverberate from Guatemala to Guantánamo to Iraq.

Dan Saxon is a prosecutor at the United Nations International Criminal Tribunal for the Former Yugoslavia.
or support indie stores by buying on
Copyright © 2020 American Booksellers Association