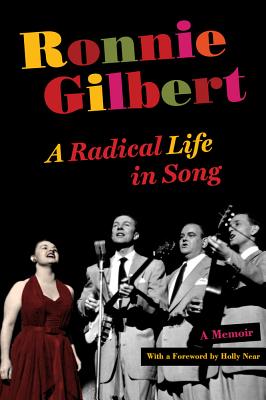 A Radical Life in Song

Ronnie Gilbert, Holly Near (Foreword by)

Ronnie Gilbert had a long and colorful career as a singer, actor, playwright, therapist, and independent woman. Her lifelong work for political and social change was central to her role as a performer. Raised in Depression-era New York City by leftist, working-class, secular Jewish parents, Gilbert is best known as a member of the Weavers, the quartet of the 1950s and '60s that survived the blacklist and helped popularize folk music in America. Her joyous contralto and vibrant stage presence enriched the celebrated group and propelled Gilbert into a second singing career with Holly Near in the 1980s and '90s. As an actor, Gilbert explored developmental theater with Joseph Chaikin and Peter Brook and wrote and performed in ensemble and solo productions across the United States and Canada.

Ronnie Gilbert brings the political, artistic, and social issues of the era alive through song lyrics and personal stories, traversing sixty years of collaborations in life and art that span the folk revival, the Cold War blacklist, primal therapy, the back-to-the-land movement, and a rich, multigenerational family story. Much more than a memoir, Ronnie Gilbert is a unique and engaging historical document for readers interested in music, theater, American politics, the women’s movement, and left-wing activism.


Praise For Ronnie Gilbert: A Radical Life in Song…

"Readers of Ronnie Gilbert: A Radical Life in Song will finish the book inspired, reinvigorated, and more committed than ever to continue the fight for justice."
— Randy Shaw

"Activism is just one of the threads winding through this title, along with music, theater, performance, politics, and the challenges of building a life outside of the 20th-century mainstream. . . . Yet it’s the music that shines the brightest in this memoir; Gilbert’s time with the Weavers and her creative partnership with Holly Near bookend a life no less remarkable for being remarkably nonlinear."

"Gilbert’s memoir brings to life the frightening political climate of the times. . . . We are fortunate that Gilbert took the time to document her singular experiences as a committed activist and singer whose soaring contralto and “dangerous songs” both accompanied and animated the progressive movements of her time."
— Elaine Elinson

"Offers an exceptional narrative about the life of a courageous and radical woman who believed that 'songs are dangerous.'"
— The Gay & Lesbian Review

"This posthumously published memoir offers an exceptional narrative about the life of a courageous and radical woman."
— Irene Javors

"Gilbert's Radical Life in Song is an honest self-examination after a long career of enthusiastic pursuits, free of defensiveness and open to change."
— Eric A. Gordon

Ronnie Gilbert was a founding member of the Weavers, along with Pete Seeger, Lee Hays, and Fred Hellerman. She became a performer and an activist on behalf of social change in the late 1940s. Her credits include the book and stage presentation Face to Face with the Most Dangerous Woman in America, detailing the life and work of Mother Jones; Legacy, a play based on the writings of Studs Terkel; and many recordings with the Weavers, Holly Near, and others.
Loading...
or support indie stores by buying on