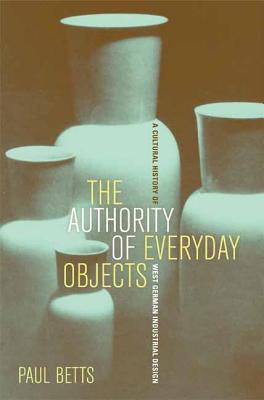 The Authority of Everyday Objects

From the Werkbund to the Bauhaus to Braun, from furniture to automobiles to consumer appliances, twentieth-century industrial design is closely associated with Germany. In this pathbreaking study, Paul Betts brings to light the crucial role that design played in building a progressive West German industrial culture atop the charred remains of the past. The Authority of Everyday Objects details how the postwar period gave rise to a new design culture comprising a sprawling network of diverse interest groups—including the state and industry, architects and designers, consumer groups and museums, as well as publicists and women's organizations—who all identified industrial design as a vital means of economic recovery, social reform, and even moral regeneration. These cultural battles took on heightened importance precisely because the stakes were nothing less than the very shape and significance of West German domestic modernity. Betts tells the rich and far-reaching story of how and why commodity aesthetics became a focal point for fashioning a certain West German cultural identity. This book is situated at the very crossroads of German industry and aesthetics, Cold War politics and international modernism, institutional life and visual culture.

Paul Betts is Lecturer in Modern German History at the University of Sussex in Brighton, England. He is the coeditor of Pain and Prosperity: Reconsidering Twentieth-Century German History (2003).
Loading...
or support indie stores by buying on