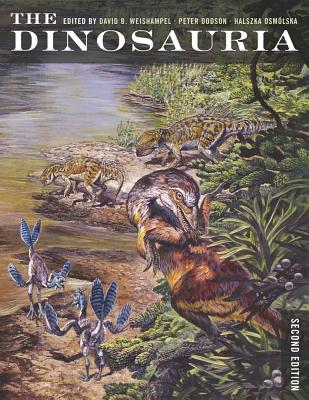 When the The Dinosauria was first published more than a decade ago, it was hailed as "the best scholarly reference work available on dinosaurs" and "an historically unparalleled compendium of information." This second, fully revised edition continues in the same vein as the first but encompasses the recent spectacular discoveries that have continued to revolutionize the field. A state-of-the-science view of current world research, the volume includes comprehensive coverage of dinosaur systematics, reproduction, and life history strategies, biogeography, taphonomy, paleoecology, thermoregulation, and extinction. Its internationally renowned authors—forty-four specialists on the various members of the Dinosauria—contribute definitive descriptions and illustrations of these magnificent Mesozoic beasts.

The first section of The Dinosauria begins with the origin of the great clade of these fascinating reptiles, followed by separate coverage of each major dinosaur taxon, including the Mesozoic radiation of birds. The second part of the volume navigates through broad areas of interest. Here we find comprehensive documentation of dinosaur distribution through time and space, discussion of the interface between geology and biology, and the paleoecological inferences that can be made through this link. This new edition will be the benchmark reference for everyone who needs authoritative information on dinosaurs.

David B. Weishampel is a Professor at the Center for Functional Anatomy and Evolution at The Johns Hopkins University School of Medicine. He is coauthor, with D. E. Fastovsky, of The Evolution and Extinction of Dinosaurs (1996) and coauthor, with L. Young, of The Dinosaurs of the East Coast (1996). Peter Dodson is Professor of Anatomy at the University of Pennsylvania School of Veterinary Medicine. He is the author of Horned Dinosaurs: A Natural History. Halszka Osmólska is Professor of Paleontology at the Paleobiological Institute of the Polish Academy of Sciences in Warsaw.
Loading...
or support indie stores by buying on