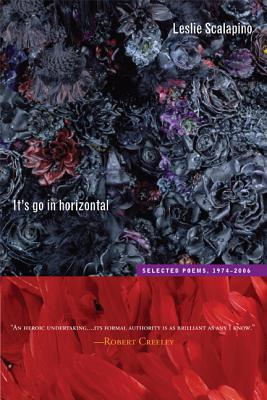 Internationally recognized as one of the most innovative writers in America today, Leslie Scalapino persistently challenges the boundaries of many forms in which she works—poetry, prose, plays, and more. This outstanding volume includes work from sequential and serial poems written over thirty-two years. The poems demonstrate ideas and inventions in writing, and how one writing invention leads to the next. Three series are selected from the long poem way, about which Philip Whalen said, "She makes everything take place in real time, in the light and air and night where all of us live, everything happening at once." Recent poems, such as those from "DeLay Rose," appear to leave the page itself as a single infinite line in which the actions of individuals and occurrences in the outside world are synonymous, mysterious, and simultaneous. It's go in horizontal is a dazzling entryway into the oeuvre of a daring and powerful writer.

“Scalapino is shown in this welcome overview to have developed a distinctive idiom.”
— Publishers Weekly

Leslie Scalapino teaches at Mills College and is a former faculty member at Milton Avery Graduate Program of the Arts at Bard College, the San Francisco Art Institute, and the Otis Art Institute in Los Angeles. Among her many books are Day Ocean State of Star's Night: Poems and Writings 1989 and 1999-2006, Dahlia's Iris: Secret Autobiography and Fiction, and Zither and Autobiography.
Loading...
or support indie stores by buying on