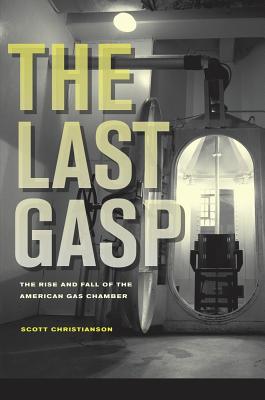 The Rise and Fall of the American Gas Chamber

The Last Gasp takes us to the dark side of human history in the first full chronicle of the gas chamber in the United States. In page-turning detail, award-winning writer Scott Christianson tells a dreadful story that is full of surprising and provocative new findings. First constructed in Nevada in 1924, the gas chamber, a method of killing sealed off and removed from the sight and hearing of witnesses, was originally touted as a “humane” method of execution. Delving into science, war, industry, medicine, law, and politics, Christianson overturns this mythology for good. He exposes the sinister links between corporations looking for profit, the military, and the first uses of the gas chamber after World War I. He explores little-known connections between the gas chamber and the eugenics movement. Perhaps most controversially, he has unearthed new evidence about American and German collaboration in the production and lethal use of hydrogen cyanide and about Hitler’s adoption of gas chamber technology developed in the United States. More than a book about the death penalty, this compelling history ultimately reveals much about America’s values and power structures in the twentieth century.

Scott Christianson is a writer, investigative reporter, and historian. He is the author of several acclaimed books, including With Liberty for Some: 500 Years of Imprisonment in America, winner of the Robert F. Kennedy Book Award Distinguished Honors and a Choice Outstanding Book Award. His book Condemned: Inside the Sing Sing Death House was the subject of feature stories in the Village Voice, the New York Times, The Nation, and on the History Channel.

Praise For The Last Gasp: The Rise and Fall of the American Gas Chamber…

“Christianson charts the 75-year history of gas chamber execution as well as its intersection with eugenics, the Holocaust, and America’s ongoing capital punishment debate. . . . Despite being developed as a swifter and more painless alternative to death than hanging or electrocution, Christianson describes in graphic detail the numerous botched executions during which death took over 10 agonizing minutes. Though the gas chamber hasn’t been used in America since 1999, Christianson makes a chilling argument for its—and the death penalty’s—abolition.”
— Publishers Weekly

“Christianson has written the definitive (actually, the only) history of the gas chamber. It is a history so complicated and convoluted that it reads almost like something out of Thomas Pynchon's Gravity's Rainbow.”
— California Lawyer

“Christianson uses government documents, newspapers, and secondary sources to present this tale and includes a list of people executed by gas in this country from 1924 to 1999. . . . This sobering work is recommended to all readers interested in exploring the topic.”
— Library Journal

“Christianson’s skills as a writer, historian and an investigative journalist are evidenced by the impressive scope and detail of his research. . . . The material provided in The Last Gasp is so thought provoking, that it is impossible not to at least consider the ideas and assertions put forth, regardless of one’s individual views. This informative and captivating book is an excellent read for undergraduate or graduate students or faculty of criminal justice/ criminology, psychology, political science or sociology.”
— Punishment & Society

“The book fills a lacuna of knowledge with a compelling narrative that will be of broad interest not only to historians, sociologists, and legal scholars but also to a nonscholarly audience.”
— Journal of American History
or support indie stores by buying on
Copyright © 2020 American Booksellers Association