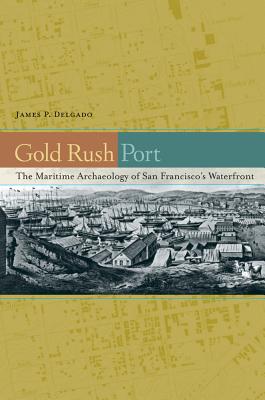 Described as a "forest of masts," San Francisco's Gold Rush waterfront was a floating economy of ships and wharves, where a dazzling array of global goods was traded and transported. Drawing on excavations in buried ships and collapsed buildings from this period, James P. Delgado re-creates San Francisco's unique maritime landscape, shedding new light on the city's remarkable rise from a small village to a boomtown of thousands in the three short years from 1848 to 1851. Gleaning history from artifacts—preserves and liquors in bottles, leather boots and jackets, hulls of ships, even crocks of butter lying alongside discarded guns—Gold Rush Port paints a fascinating picture of how ships and global connections created the port and the city of San Francisco. Setting the city's history into the wider web of international relationships, Delgado reshapes our understanding of developments in the Pacific that led to a world system of trading.

James P. Delgado is the President of the Institute of Nautical Archaeology. His previous books include Lost Warships: An Archaeological Tour of War at Sea, Across the Top of the World: The Quest for the Northwest Passage, and the British Museum Encyclopedia of Underwater and Maritime Archaeology.

“A fantastic tale of maritime history on the Pacific frontier.”
— American Archaeology

“Delgado’s book is both a monumental labor and a tour de force. . . . Highly recommended.”
— Choice

“An essential reference for anyone interested in the salty side of San Francisco history.”
— Lynn Downey

“An essential reference for anyone interested in the salty side of San Francisco history.”
— Lynn Downey
or support indie stores by buying on
Copyright © 2020 American Booksellers Association