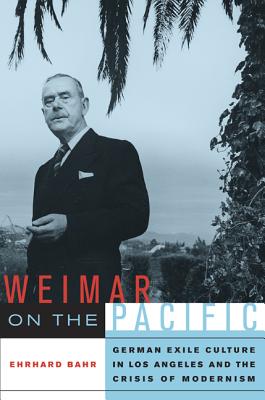 Weimar on the Pacific

In the 1930s and 40s, Los Angeles became an unlikely cultural sanctuary for a distinguished group of German artists and intellectuals—including Thomas Mann, Theodore W. Adorno, Bertolt Brecht, Fritz Lang, and Arnold Schoenberg—who had fled Nazi Germany. During their years in exile, they would produce a substantial body of major works to address the crisis of modernism that resulted from the rise of National Socialism. Weimar Germany and its culture, with its meld of eighteenth-century German classicism and twentieth-century modernism, served as a touchstone for this group of diverse talents and opinions.

Weimar on the Pacific is the first book to examine these artists and intellectuals as a group. Ehrhard Bahr studies selected works of Adorno, Horkheimer, Brecht, Lang, Neutra, Schindler, Döblin, Mann, and Schoenberg, weighing Los Angeles’s influence on them and their impact on German modernism. Touching on such examples as film noir and Thomas Mann’s Doctor Faustus, Bahr shows how this community of exiles reconstituted modernism in the face of the traumatic political and historical changes they were living through.


Praise For Weimar on the Pacific: German Exile Culture in Los Angeles and the Crisis of Modernism (Weimar and Now: German Cultural Criticism #41)…

“Each chapter in Bahr's book is capable of standing alone, but the author also invokes ideas, incidents and personalities in each chapter that strike sparks off the material in other chapters. . . . Weimar on the Pacific is a brilliant tour de force of intellectual history and cultural criticism, both audacious and accomplished.”
— Los Angeles Times Book Review

“An excellent study . . . that will broaden our understanding of German exile culture in North America.”
— Seminar: A Journal of Germanic Studies

“This is a wonderful book. . . . The writing is distinguished by a profound knowledge of its many subjects, an infectious interest, and a sharp eye for telling details, all of which bring the material alive.”
— Modern Language Review

“This important book--of meticulous and impressive research, refined analysis, and lucid organization and writing--is demanding, a challenge to the author’s peers and yet rewarding also for the generally educated reader.”
— Register of the Kentucky Historical Society

Ehrhard Bahr is distinguished professor emeritus of German at UCLA.
Loading...
or support indie stores by buying on