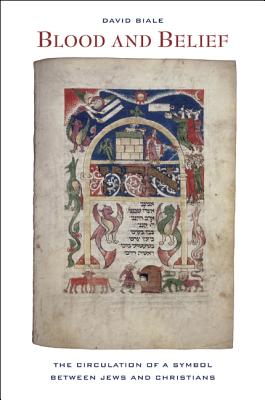 The Circulation of a Symbol between Jews and Christians

Blood contains extraordinary symbolic power in both Judaism and Christianity—as the blood of sacrifice, of Jesus, of the Jewish martyrs, of menstruation, and more. Yet, though they share the same literary, cultural, and religious origins, on the question of blood the two religions have followed quite different trajectories. For instance, while Judaism rejects the eating or drinking of blood, Christianity mandates its symbolic consumption as a central sacrament. How did these two traditions, both originating in the Hebrew Bible's cult of blood sacrifices, veer off in such different directions? With his characteristic wit and erudition, David Biale traces the continuing, changing, and often clashing roles of blood as both symbol and substance through the entire sweep of Jewish and Christian history from Biblical times to the present.

Praise For Blood and Belief: The Circulation of a Symbol between Jews and Christians…

“Biale’s writing is as interesting, and sometimes as controversial, as his topics.”
— Ingrid Wilkerson

“Bird provides readers with a readable, informed overview of the state of the question.”
— Hebrew Studies: A Journal Devoted To Hebrew Language And Literature

David Biale is Emanuel Ringelblum Professor of Jewish History at the University of California, Davis and author of Eros and the Jews: From Biblical Israel to Contemporary America (UC Press). He edited Cultures of the Jews: A New History, and Insider/Outsider: American Jews and Multiculturalism (UC Press) with Susannah Heschel and Michael Galchinsky.
Loading...
or support indie stores by buying on