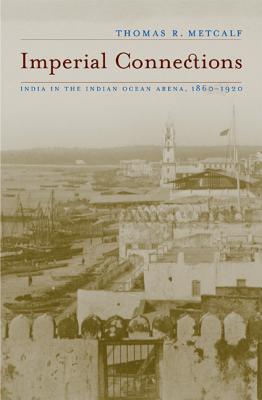 An innovative remapping of empire, Imperial Connections offers a broad-ranging view of the workings of the British Empire in the period when the India of the Raj stood at the center of a newly globalized system of trade, investment, and migration. Thomas R. Metcalf argues that India itself became a nexus of imperial power that made possible British conquest, control, and governance across a wide arc of territory stretching from Africa to eastern Asia. His book, offering a new perspective on how imperialism operates, emphasizes transcolonial interactions and webs of influence that advanced the interests of colonial India and Britain alike. Metcalf examines such topics as law codes and administrative forms as they were shaped by Indian precedents; the Indian Army's role in securing Malaya, Africa, and Mesopotamia for the empire; the employment of Indians, especially Sikhs, in colonial policing; and the transformation of East Africa into what was almost a province of India through the construction of the Uganda railway. He concludes with a look at the decline of this Indian Ocean system after 1920 and considers how far India's participation in it opened opportunities for Indians to be a colonizing as well as a colonized people.

Thomas R. Metcalf, Professor of History Emeritus at the University of California, Berkeley, is author of Forging the Raj, Ideologies of the Raj, An Imperial Vision: Indian Architecture, and Britain’s Raj (UC Press), and, with Barbara Daly Metcalf, A Concise History of Modern India.

“A welcome and comprehensive effort to bring what is variously a transnational, imperial, oceanic, and a global history forward.”
— Jayeeta Sharma
or support indie stores by buying on
Copyright © 2020 American Booksellers Association