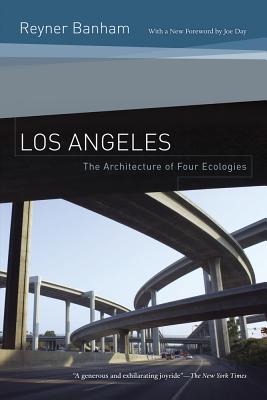 The Architecture of Four Ecologies

Reyner Banham examined the built environment of Los Angeles in a way no architectural historian before him had done, looking with fresh eyes at its manifestations of popular taste and industrial ingenuity, as well as its more traditional modes of residential and commercial building. His construct of "four ecologies" examined the ways Angelenos relate to the beach, the freeways, the flatlands, and the foothills. Banham delighted in this mobile city and identified it as an exemplar of the posturban future. In a spectacular new foreword, architect and scholar Joe Day explores how the structure of Los Angeles, the concept of "ecology," and the relevance of Banham's ideas have changed over the past thirty-five years.

Praise For Los Angeles: The Architecture of Four Ecologies…

“What [Banham] went looking for, and the way he wrote about what he saw and felt, redefined the way the intellectual world—and then the wider world—perceived the city. . . . Banham wrote like a blissed-out lover, surrendering to his feelings of derangement and wonder while keeping his eyes wide-open. . . . [Los Angeles: The Architecture of Four Ecologies] has now been reissued in a new edition with an excellent introduction by architect and scholar Joe Day. It is a landmark in the history of writing L.A.”
— Los Angeles Times

“Still as penetrating now as when Banham completed his observations on the city in 1971.”
— LA Observed

“Four decades later [Banham’s] observations still seem sharp and illuminating. . . . Even now, to look at his aerial view of the I-10/405 interchange is to forget all the hours spent inching through its torn-up lanes and simply agree. The interchange is a work of art, full of rhythm, grit, and expansive grace—like Banham’s book itself. In one volume he does the near-impossible: He makes us see this fragmented city as a breathing whole. As he expected, its ephemerality has begun to look like a virtue. Los Angeles, the city built not to last, is the city that adapts.”
— Los Angeles Magazine

“[Los Angeles] has emerged as a central text on the city. . . . Perhaps because of its uncompromising vision, Banham's book has remained au courant.”
— Palisadian Post

"This is a book which everyone interested in the history of Los Angeles must read. It has the rare qualities of an original vision, an easy breezy style, and an organic order. Moreover, it is richly illustrated with over a hundred photographs, maps, and charts."
— Pacific Historical Review

Reyner Banham (1922-1988) was Sheldon H. Solow Professor of the History of Architecture at the Institute of Fine Arts, New York University. Joe Day leads deegan day design llc and serves on the design faculty at the Southern California Institute of Architecture.
Loading...
or support indie stores by buying on