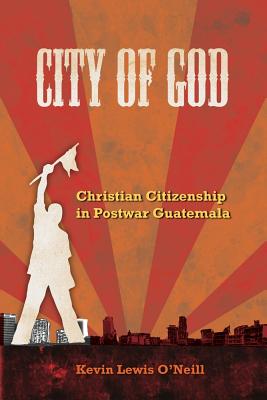 Christian Citizenship in Postwar Guatemala (The Anthropology of Christianity #7)

In Guatemala City today, Christianity isn't just a belief system--it is a counterinsurgency. Amidst postwar efforts at democratization, multinational mega-churches have conquered street corners and kitchen tables, guiding the faithful to build a sanctified city brick by brick. Drawing on rich interviews and extensive fieldwork, Kevin Lewis O'Neill tracks the culture and politics of one such church, looking at how neo-Pentecostal Christian practices have become acts of citizenship in a new, politically relevant era for Protestantism. Focusing on everyday practices--praying for Guatemala, speaking in tongues for the soul of the nation, organizing prayer campaigns to combat unprecedented levels of crime--O'Neill finds that Christian citizenship has re-politicized the faithful as they struggle to understand what it means to be a believer in a desperately violent Central American city. Innovative, imaginative, conceptually rich, City of God reaches across disciplinary borders as it illuminates the highly charged, evolving relationship between religion, democracy, and the state in Latin America.

Praise For City of God: Christian Citizenship in Postwar Guatemala (The Anthropology of Christianity #7)…

“Provides a rich perspective on the diversity of Christian conceptualizations of citizenship.”
— Missiology

"City of God [is] an important contribution that is provocative, engaging, and challenging all at once."
— Anthony Shenoda

Kevin Lewis O'Neill is Assistant Professor in the University of Toronto's Department and Centre for the Study of Religion and the Centre for Diaspora and Transnational Studies. He is coeditor, with Alex Laban Hinton, of Genocide: Truth, Memory, and Representation.
or support indie stores by buying on