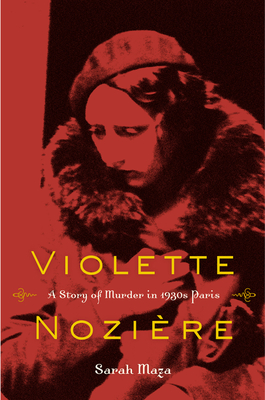 On an August evening in 1933, in a quiet, working-class neighborhood in Paris, eighteen-year-old Violette Nozière gave her mother and father glasses of barbiturate-laced “medication,” which she told them had been prescribed by the family doctor; one of her parents died, the other barely survived. Almost immediately Violette’s act of “double parricide” became the most sensational private crime of the French interwar era—discussed and debated so passionately that it was compared to the Dreyfus Affair. Why would the beloved only child of respectable parents do such a thing? To understand the motives behind this crime and the reasons for its extraordinary impact, Sarah Maza delves into the abundant case records, re-creating the daily existence of Parisians whose lives were touched by the affair. This compulsively readable book brilliantly evokes the texture of life in 1930s Paris. It also makes an important argument about French society and culture while proposing new understandings of crime and social class in the years before World War II.

Sarah Maza is Jane Long Professor of Arts and Sciences and Professor of History at Northwestern University. She is the author of many books including award winners Private Lives and Public Affairs: The Causes Célèbres of Prerevolutionary France (UC Press) and The Myth of the French Bourgeoisie: An Essay on the Social Imaginary, 1750-1850.

Praise For Violette Noziere: A Story of Murder in 1930s Paris…

“Maza explains brilliantly how and why Violette’s story—or a culturally acceptable version of her story—grew from being a mere fait divers, or miscellaneous news item, into a nationally staged drama that bound France in schadenfreude-laced fascination near the end of the turbulent and divisive Third Republic. Combining a neatly suspenseful account of Violette’s crime and its consequences with a richly layered cultural history . . . she skillfully analyzes Violette’s transformation from wretched schoolgirl to cultural icon.”
— Judith Warner

“An academic history with a pulpy noir heart.”
— Publishers Weekly

“The story itself is so fascinating that general readers interested in crime and mystery will be enthralled.”
— Marie Marmo Mullaney

“A true-life detective tale set not amid the glamour and romance of a well-touristed Paris but in a secret city that runs thick with the lives of the forgotten and the abandoned.”
— David Kennedy Jones

“Compelling. . . . A brief review cannot convey the elegance and persuasiveness of Maza’s version of this famous case.”
— Robert A. Nye, Oregon State University

“The trial captivated France, and readers will be just as captivated by Maza’s study of Noziere and the culture of interwar France.”
— Eric Feil

A well-researched and thoroughly readable account of French culture as revealed in a generally forgotten murder case.”
— Jaime O'Neill
or support indie stores by buying on
Copyright © 2020 American Booksellers Association