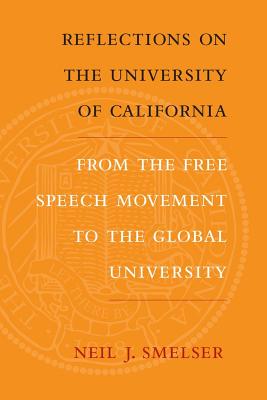 Reflections on the University of California

From the Free Speech Movement to the Global University

These invaluable essays offer an insider’s perspective on three decades at a major American university during a time of political turmoil. Neil J. Smelser, who spent thirty-six years as a professor of sociology at the University of California, Berkeley, sheds new light on a full range of the issues that dominated virtually all institutions of higher learning during the second half of the twentieth century. Smelser considers student activism—in particular the Free Speech Movement at Berkeley—political surprises, affirmative action, multiculturalism and the culture wars, and much more. As one of the leading sociologists of his generation, Smelser is uniquely qualified to convey and analyze the complexities of administrating a first-rate and very large university as it encounters a highly politicized environment.

Praise For Reflections on the University of California: From the Free Speech Movement to the Global University…

Neil J. Smelser is University Professor Emeritus of Sociology at the University of California, Berkeley. He is the author of The Social Edges of Psychoanalysis and The Odyssey Experience among many other books.
Loading...
or support indie stores by buying on