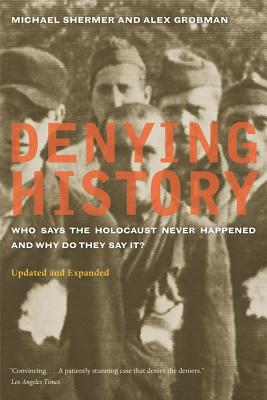 Who Says the Holocaust Never Happened and Why Do They Say It? Updated and Expanded

Denying History takes a bold and in-depth look at those who say the Holocaust never happened and explores the motivations behind such claims. While most commentators have dismissed the Holocaust deniers as antisemitic neo-Nazi thugs who do not deserve a response, historians Michael Shermer and Alex Grobman have immersed themselves in the minds and culture of these Holocaust "revisionists." In the process, they show how we can be certain that the Holocaust happened and, for that matter, how we can confirm any historical event. This edition is expanded with a new chapter and epilogue examining current, shockingly mainstream revisionism.

Praise For Denying History: Who Says the Holocaust Never Happened and Why Do They Say It? Updated and Expanded…

“Should be required reading for everyone!”
— Martyrdom & Resistance

“Their book offers a crash course in dialectics, a rogue’s gallery of deniers, and refutation to claims the premeditated Nazi genocide of six million Jews is history’s greatest hoax.”
— International Jerusalem Post

"Shermer and Grobman have written a very useful book."
— History and Theory

Michael Shermer is the Founding Publisher of Skeptic magazine and Adjunct Professor of Economics at Claremont Graduate University. Alex Grobman is President of the Institute for Contemporary Jewish Life and the Brenn Institute.
Loading...
or support indie stores by buying on