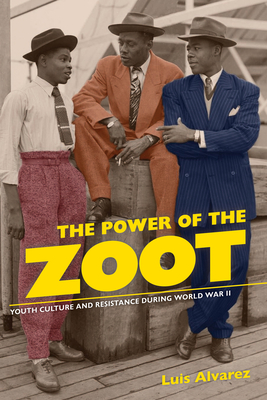 The Power of the Zoot

Flamboyant zoot suit culture, with its ties to fashion, jazz and swing music, jitterbug and Lindy Hop dancing, unique patterns of speech, and even risqué experimentation with gender and sexuality, captivated the country's youth in the 1940s. The Power of the Zoot is the first book to give national consideration to this famous phenomenon. Providing a new history of youth culture based on rare, in-depth interviews with former zoot-suiters, Luis Alvarez explores race, region, and the politics of culture in urban America during World War II. He argues that Mexican American and African American youths, along with many nisei and white youths, used popular culture to oppose accepted modes of youthful behavior, the dominance of white middle-class norms, and expectations from within their own communities.

Praise For The Power of the Zoot: Youth Culture and Resistance during World War II (American Crossroads #24)…

“Diligently charts a culture’s exemplar, the zoot suit, and connects it to modern fashion and music . . . . It is a compelling window into the U.S. in the war years as seen from a much different point of view.”
— The Morning News

“Deserves much credit for analyzing youth fashion during the era of swing jazz as a national phenomenon .”
— The Journal Of American History

“[Alvarez’s] scholarship is now the best and most comprehensive book on Zoot Suit culture, society, and race conflict during World War II.”
— H-Urban

“The work is admirable wide and deep.”
— Journal Of World History

“A solid contribution to the field.”
— Winterthur Portfolio: Journal Of American Material Culture

Luis Alvarez is Associate Professor of History at the University of California, San Diego.
Loading...
or support indie stores by buying on