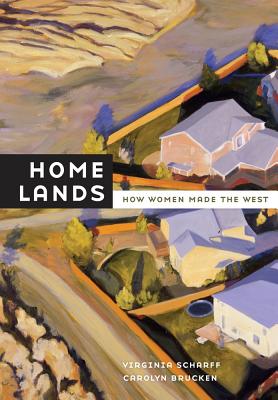 How Women Made the West

The storybook history of the American West is a male-dominated narrative of drifters, dreamers, hucksters, and heroes—a tale that relegates women, assuming they appear at all, to the distant background. Home Lands: How Women Made the West upends this view to remember the West as a place of homes and habitations brought into being by the women who lived there. Virginia Scharff and Carolyn Brucken consider history’s long span as they explore the ways in which women encountered and transformed three different archetypal Western landscapes: the Rio Arriba of northern New Mexico, the Front Range of Colorado, and the Puget Sound waterscape. This beautiful book, companion volume to the Autry National Center’s pathbreaking exhibit, is a brilliant aggregate of women’s history, the history of the American West, and studies in material culture. While linking each of these places’ peoples to one another over hundreds, even thousands, of years, Home Lands vividly reimagines the West as a setting in which home has been created out of differing notions of dwelling and family and differing concepts of property, community, and history.


Praise For Home Lands: How Women Made the West…

“Feeling western women have been underrepresented in recorded American history, Scharff and Brucken have attempted to revolutionize the feminine impression. Sharing actual anecdotes, the authors detail the lives and impacts of women in three major areas: the Rio Arriba, the Front Range, and the Puget Sound. Although many of their contributions were local, it was these women, in their homes and small towns, whom Scharff and Brucken credit for the manifestation of the Western United States. This discussion of culture, community, familial linkage, and landscape puts women in the well-deserved forefront.”
— Foreword Reviews

“An accessible and engaging look at the history of the West, an at Women’s roles in shaping its present.”
— New Mexico Magazine

“Readers will see how central the history of western women is to the history of the West. . . . [and it] should work well as a text in American women’s history and western history courses.”
— Pacific Northwest Quarterly

“This book reminds historians that they need to know more about the ways in which migrations set in motion a myriad variety of homes.”
— Transfers: Interdisciplinary Mobility Studies

Virginia Scharff is Professor of History at the University of New Mexico, Women of the West Chair at the Autry National Center's Institute for the Study of the American West, and President of the Western History Association. Her many books include Taking the Wheel, Twenty Thousand Roads, and Seeing Nature through Gender. Carolyn Brucken is Curator of Western Women's History at the Autry National Center.
Loading...
or support indie stores by buying on