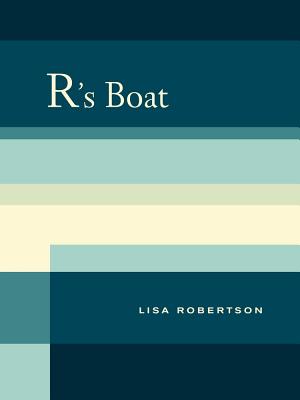 I wanted narrative to be a picture of distances ringed in purple.

Then I wanted it to be electronic fields exempt from sentiment.

Then I wanted it to be the patient elaboration of my senses.

The boldly original Canadian poet Lisa Robertson has received high praise for the uncompromising intelligence and style of her poetry. In R’s Boat, she brings us to the crossroads of poetry, theory, the body, and cultural criticism. These poems bring fresh vehemence to Robertson’s ongoing examination of the changing shape of feminism, the male-dominated philosophical tradition, the daily forms of discourse, and the possibilities of language itself.

Praise for Lisa Robertson's The Men:

“In The Men, as in much of her work, Robertson makes intellect seductive; only her poetry could turn swooning into a critical gesture.”-Village Voice

“Robertson writes both from within and against the tradition-splitting, seeding, and suturing the cracks in each ideational edifice. . . . Her occupations with past forms lead not to a backward-looking poetry but forward to a fresh field of inquiry, an imaginatively created utopia.”-Boston Review

“With R’s Boat, Robertson evolves a new form and idiom so as to short-circuit familiar representations of self and, perhaps, to imagine new and utopian social relations.”
— Boston Review

Lisa Robertson is the author of The Apothecary; XEclogue; Debbie: An Epic, nominated for the Governor General's Award in 1998; The Weather, awarded the Relit Poetry Prize; Occasional Work and Seven Walks from the Office for Soft Architecture, a Village Voice top book of 2004; Rousseau's Boat, which won the bp Nichol Chapbook Award; and Lisa Robertson's Magenta Soul Whip.
Loading...
or
Not Currently Available for Direct Purchase