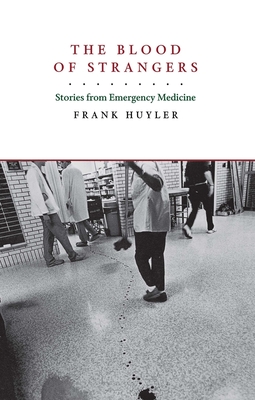 The Blood of Strangers

Reminiscent of Chekhov's stories, The Blood of Strangers is a visceral portrayal of a physician's encounters with the highly charged world of an emergency room. In this collection of spare and elegant stories, Dr. Frank Huyler reveals a side of medicine where small moments—the intricacy of suturing a facial wound, the bath a patient receives from her husband and daughter—interweave with the lives and deaths of the desperately sick and injured.

The author presents an array of fascinating characters, both patients and doctors—a neurosurgeon who practices witchcraft, a trauma surgeon who unexpectedly commits suicide, a wounded murderer, a man chased across the New Mexico desert by a heat-seeking missile. At times surreal, at times lyrical, at times brutal and terrifying, The Blood of Strangers is a literary work that emerges from one of the most dramatic specialties of modern medicine. This deeply affecting first book has been described by one early reader as "the best doctor collection I have seen since William Carlos Williams's The Doctor Stories."


Praise For The Blood of Strangers: Stories from Emergency Medicine…

"The author of these doctor stories is an E.R. physician as well as a poet, and his work shows the economy and sharp attention that both jobs demand."
— New Yorker

"Huyler's perfectly titled collection of ultra-brief stories . . . has the force of literature because he does not ignore either medicine's rewards or its price. Without sentimentality or melodrama, Huyler, an emergency department physician and poet, spares us the moralistic exhortation to "treat the person behind the patient" (Who is this person, and what is he or she doing there behind the patient anyway?), the frantic heroics, and the gratuitous exclamation marks. These spare stories transmit emotions as if from a distance, but with a tender fidelity. With Huyler's light touch, the muting of a doctor's feelings and the coarsening of his spirit—which might have been rendered as callousness or indifference by a heavier hand—come off more gently, as a form of modesty, as a kind of phlegmatic wisdom, as an acceptance of limits."
— New England Journal of Medicine

""Observant and sympathetic, Huyler is a vivid writer . . . each flash of memory is gripping."
— New Scientist

"This haunting, exquisitely observed collection of medical vignettes is much more than a compilation of odd cases from the emergency room."
— Publishers Weekly

"The Blood of Strangers is a truly important work of medical literature. . . . This is a book likely to develop self reflection and empathy in the medical reader."
— Medical Humanities

"These 28 vignettes tell in stripped-down prose what [Huyler's] profession is like, leaving the reader both shocked and moved."
— San Francisco Chronicle Book Review

"The Blood of Strangers is a work of art, an utter pleasure to read and reread, and a good example of how transcendent medical stories can be in the right hands. In a series of short, linked pieces that span his career from medical student to young emergency room attending, Huyler recreates the connected worlds of emergency room, operating room, and intensive care unit accurately and—no small trick—without a shred of sentimentality. . . . If anyone is likely to succeed in capturing the entire tragicomedy of modern medicine in prose for posterity, he [Huyler] is the guy."
— Hastings Center Report

"The stories illustrate Huyler's understanding of medicine and psychology as aids to humanity, not means to a physician's self-glorification."
— Booklist

Frank Huyler is an emergency physician in Albuquerque, New Mexico, and the author of the novel The Laws of Invisible Things. He grew up in Iran, Brazil, and Japan.
Loading...
or support indie stores by buying on