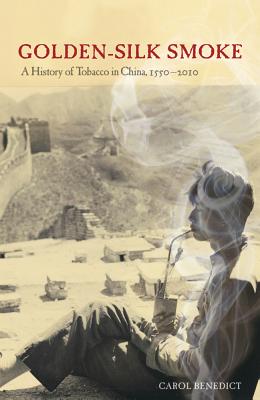 From the long-stemmed pipe to snuff, the water pipe, hand-rolled cigarettes, and finally, manufactured cigarettes, the history of tobacco in China is the fascinating story of a commodity that became a hallmark of modern mass consumerism. Carol Benedict follows the spread of Chinese tobacco use from the sixteenth century, when it was introduced to China from the New World, through the development of commercialized tobacco cultivation, and to the present day. Along the way, she analyzes the factors that have shaped China’s highly gendered tobacco cultures, and shows how they have evolved within a broad, comparative world-historical framework. Drawing from a wealth of historical sources—gazetteers, literati jottings (biji), Chinese materia medica, Qing poetry, modern short stories, late Qing and early Republican newspapers, travel memoirs, social surveys, advertisements, and more—Golden-Silk Smoke not only uncovers the long and dynamic history of tobacco in China but also sheds new light on global histories of fashion and consumption.

Carol Benedict is Associate Professor in the School of Foreign Service and the Department of History at Georgetown University. She is the author of Bubonic Plague in Nineteenth Century China.

“Required reading for anyone interested in global commodity history or Chinese consumer history.”
— L. Teh

“A font of empirical information and a model of source analysis.”
— Social History Of Medicine

“A success on many fronts... It is easy to see that numerous audiences would find this book a rewarding examination of an engaging topic.”
— Matthew P. Romaniello
or
Not Currently Available for Direct Purchase
Copyright © 2020 American Booksellers Association