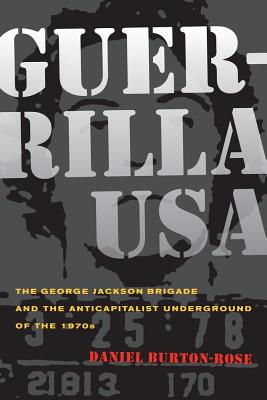 The George Jackson Brigade and the Anticapitalist Underground of the 1970s

“We are cozy cuddly/armed and dangerous/and we will/raze the fucking prisons/to the ground.” In an attempt to deliver on this promise, the George Jackson Brigade launched a violent three-year campaign in the mid-1970s against corporate and state institutions in the Pacific Northwest. This campaign, conceived by a group of blacks and whites, both straight and gay, claimed fourteen bombings, as many bank robberies, and a jailbreak. Drawing on extensive interviews with surviving members of the George Jackson Brigade, Guerrilla USA provides an inside-out perspective on the social movements of the 1970s, revealing the whole era in a new and more complex light. It is also a compelling exploration of the true nature of crime and a provocative meditation on the tension between self-restraint and anger in the process of social change.

Praise For Guerrilla USA: The George Jackson Brigade and the Anticapitalist Underground of the 1970s…

“Burton-Rose demonstrates an extensive knowledge on the subject and provides a great source of information.”
— Susie Poulter

“Guerilla USA is useful as a window into the radical underground.”
— Kieran Taylor

Daniel Burton-Rose is the editor of Creating a Movement with Teeth: A Documentary History of the George Jackson Brigade, and coeditor, with Dan Pens and Paul Wright, of The Celling of America: An Inside Look at the U.S. Prison Industry, among other books.
Loading...
or support indie stores by buying on