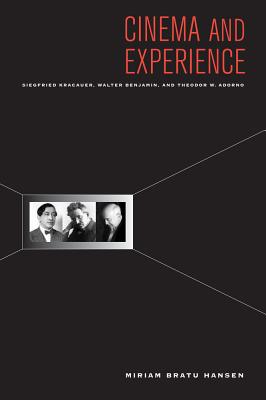 Siegfried Kracauer, Walter Benjamin, and Theodor W. Adorno—affiliated through friendship, professional ties, and argument—developed an astute philosophical critique of modernity in which technological media played a key role. This book explores in depth their reflections on cinema and photography from the Weimar period up to the 1960s. Miriam Bratu Hansen brings to life an impressive archive of known and, in the case of Kracauer, less known materials and reveals surprising perspectives on canonic texts, including Benjamin’s artwork essay. Her lucid analysis extrapolates from these writings the contours of a theory of cinema and experience that speaks to questions being posed anew as moving image culture evolves in response to digital technology.

“This magisterial book is a gift. . . . There is no other study like it.”
— Artforum

[Hansen’s] reader is amply rewarded by the rich suggestiveness and expansive quality of her insights. . . . A crowning achievement.”
— Bookforum

“A crowning achievement in its own right.”
— Noah Isenberg

The late Miriam Bratu Hansen was Ferdinand Schevill Distinguished Service Professor in the Humanities at the University of Chicago and the founding chair of what is now the Department of Cinema and Media Studies. Her publications include Babel and Babylon: Spectatorship in American Silent Film and numerous essays in international film history and film theory.
Loading...
or support indie stores by buying on