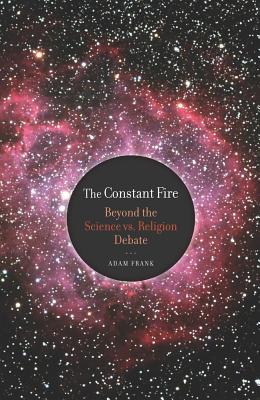 Beyond the Science vs. Religion Debate

Eloquent, urgent, and inspiring, The Constant Fire tackles the acrimonious debate between science and religion, taking us beyond its stagnant parameters into the wider domain of human spiritual experience. From a Neolithic archaeological site in Ireland to modern theories of star formation, Adam Frank traverses a wide terrain, broadening our sights and allowing us to imagine an alternative perspective. Drawing from his experience as a practicing astrophysicist and from the writings of the great scholars of religion, philosophy, and mythology, Frank locates the connective tissue linking science and religion—their commonality as sacred pursuits—and finds their shared aspiration in pursuit of "the True and the Real." Taking us from the burning of Giordano Bruno in 1600 to Einstein and on to today's pressing issues of global warming and resource depletion, The Constant Fire shows us how to move beyond this stale debate into a more profound experience of the world as sacred—a world that embraces science without renouncing human spirituality.

Praise For The Constant Fire: Beyond the Science vs. Religion Debate…

“An elegant reimagining of the relationship between science and spirituality. Frank challenges the assumption that science and religion are implacable foes.”
— Chronicle of Higher Education

"Light years beyond the stale standoff between uninspired scientific materialism and unscientific intelligent design, this vision of coexistence appreciates the heavenly music of the spheres." (Starred Review)
— Publishers Weekly

"Frank's title takes the religion and science dialogue in new directions. While the book is atheistic–––or at least agnostic––in terms of affiliation, the practice of science as told by Frank is spiritual. It is highly recommended to graduate students in philosophy."
— Reviews in Religion & Theology

Adam Frank is Professor of Astrophysics at the University of Rochester and a regular contributor to Discover and Astronomy magazines. He has also written for Scientific American and many other publications. He was a Hubble Fellow and is the recipient of an American Astronomical Society Prize for his scientific writing.
Loading...
or support indie stores by buying on