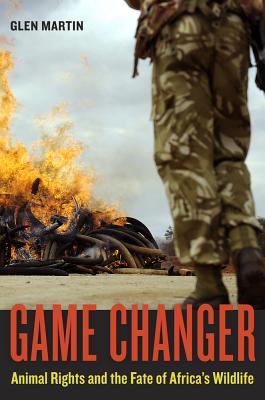 Animal Rights and the Fate of Africa’s Wildlife

Are conservation and protecting animals the same thing? In Game Changer, award-winning environmental reporter Glen Martin takes a fresh look at this question as it applies to Africa’s megafauna. Martin assesses the rising influence of the animal rights movement and finds that the policies championed by animal welfare groups could lead paradoxically to the elimination of the very species—including elephants and lions—that are the most cherished. In his anecdotal and highly engaging style, Martin takes readers to the heart of the conflict. He revisits the debate between conservationists, who believe that people whose lives are directly impacted by the creation of national parks and preserves should be compensated, versus those who believe that restrictive protection that forbids hunting is the most effective way to conserve wildlife and habitats. Focusing on the different approaches taken by Kenya, Tanzania, and Namibia, Martin vividly shows how the world’s last great populations of wildlife have become the hostages in a fight between those who love animals and those who would save them.

Glen Martin is the author of National Geographic’s Guide to Wildlife Watching: 100 of the Best Places in America to See Animals in their Natural Habitat and coauthor (with Jay Stuller) of Through the Grapevine: The Real Story Behind America’s $8 Billion Wine Industry.

Praise For Game Changer: Animal Rights and the Fate of Africa’s Wildlife…

“Martin builds a convincing case. . . . But the real value of Martin’s book is in showing how hard it is to find any conservation strategy that works in the complex reality of today’s Africa. . . . Walking the fine line between unregulated killing and managed hunting will not be easy but, Martin concludes, it may be the only hope for Africa’s wild creatures.”
— Bob Holmes

“Africa’s wild megafauna are caught in the crossfire between animal-welfare campaigners and conservationists. . . . In this pacy, unsentimental account, Martin . . . points out that measures such as ecotourism and protection for iconic species have backfired dramatically.”
— Nature (2)

“The real value of Martin’s book is in showing how hard it is to find any strategy that works in . . . today’s Africa.”
— Bob Holmes

“Martin’s work incisively probes complexities most wildlife lovers have likely never considered, but urgently need to, before some of their beloved species utterly disappear from the earth.”
— Carl Hays

“A perceptive if partisan examination of a continent-wide controversy over how best to preserve Africa's amazing wildlife heritage.”
— San Francisco Chronicle

“This book is a must-read for anyone interested in African wildlife conservation.”
— Diana Rupp