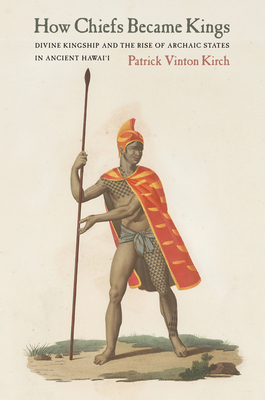 Divine Kingship and the Rise of Archaic States in Ancient Hawai'i

In How Chiefs Became Kings, Patrick Vinton Kirch addresses a central problem in anthropological archaeology: the emergence of “archaic states” whose distinctive feature was divine kingship. Kirch takes as his focus the Hawaiian archipelago, commonly regarded as the archetype of a complex chiefdom. Integrating anthropology, linguistics, archaeology, traditional history, and theory, and drawing on significant contributions from his own four decades of research, Kirch argues that Hawaiian polities had become states before the time of Captain Cook’s voyage (1778-1779). The status of most archaic states is inferred from the archaeological record. But Kirch shows that because Hawai`i’s kingdoms were established relatively recently, they could be observed and recorded by Cook and other European voyagers. Substantive and provocative, this book makes a major contribution to the literature of precontact Hawai`i and illuminates Hawai`i’s importance in the global theory and literature about divine kingship, archaic states, and sociopolitical evolution.

Praise For How Chiefs Became Kings: Divine Kingship and the Rise of Archaic States in Ancient Hawai'i…

“Concise, but data-rich and sophisticated in its dissection of social theory.”
— Norman Yoffee

“Complete and compelling. . . . This is an important book, and everyone with a serious interest in Hawaiian history should read it.”
— Thomas A. Woods, Executive Director, Mission Houses Museum

Patrick Vinton Kirch is Class of 1954 Professor of Anthropology and Integrative Biology at the University of California, Berkeley. He is the author of many books, including Feathered Gods and Fishhooks and On the Road of the Winds (UC Press).
Loading...
or
Not Currently Available for Direct Purchase