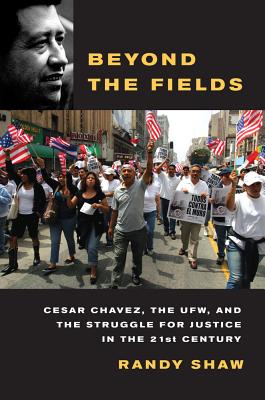 Beyond the Fields (Paperback)

Cesar Chavez, the UFW, and the Struggle for Justice in the 21st Century

Cesar Chavez is the most prominent Latino in United States history books, and much has been written about Chavez and the United Farm Worker's heyday in the 1960s and '70s. But left untold has been their ongoing impact on 21st century social justice movements. Beyond the Fields unearths this legacy, and describes how Chavez and the UFW's imprint can be found in the modern reshaping of the American labor movement, the building of Latino political power, the transformation of Los Angeles and California politics, the fight for environmental justice, and the burgeoning national movement for immigrant rights. Many of the ideas, tactics, and strategies that Chavez and the UFW initiated or revived—including the boycott, the fast, clergy-labor partnerships and door-to-door voter outreach—are now so commonplace that their roots in the farmworkers' movement is forgotten.

This powerful book also describes how the UFW became the era's leading incubator of young activist talent, creating a generation of skilled alumni who went on to play critical roles in progressive campaigns. UFW volunteers and staff were dedicated to furthering economic justice, and many devoted their post-UFW lives working for social change. When Barack Obama adopted “Yes We Can” as his 2008 campaign theme, he confirmed that the spirit of “Si Se Puede” has never been stronger, and that it still provides the clearest roadmap for achieving greater social and economic justice in the United States.

Randy Shaw is the Director of San Francisco's Tenderloin Housing Clinic, and is Editor of the online daily newspaper, BeyondChron.org. His previous books are The Activist's Handbook and Reclaiming America, both from UC Press.

Praise For Beyond the Fields: Cesar Chavez, the UFW, and the Struggle for Justice in the 21st Century…

“A seminal new work not only for historians and devotees of the Chicano Movement, and the UFW in particular, but for all those working for progressive causes.”
— Susan Marie Green

“Invaluable for anyone interested in the evolution of unionization over the past forty years.”
— T. A. Frank

“A useful resource for anyone interested in organizing, activism, or social movements.”
— Misslaura

“Invaluable for anyone interested in the evolution of unionization over the past forty years.”
— The Washington Monthly

“Shows the enduring value of the UFW’s approach . . . on the job and in the community.”
— Bill Knight

“Shows the enduring value of the UFW’s approach . . . on the job and in the community.”
— Bill Knight

“A useful resource for anyone interested in organizing, activism, or social movements.”
— Misslaura

“Shaw does a stellar job of writing the history of the UFW and its key figures.”
— Victor Corral