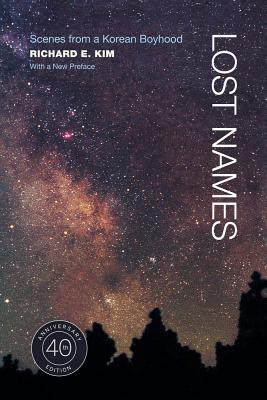 Scenes from a Korean Boyhood

In this autobiography, Richard E. Kim paints seven vivid scenes from a boyhood and early adolescence in Korea at the height of the Japanese occupation during WWII, 1932 to 1945. Taking its title from the grim fact that the occupiers forced the Koreans to renounce their own names and adopt Japanese names instead, the book follows one Korean family through the Japanese occupation to the surrender of Japan and dissolution of the Japanese empire. Examining the intersections of Japanese and Korean history that influenced Korea-Japan relations at the time, Lost Names is at once a loving memory of family, an ethnography of Zainichi Koreans in 1930s Japan, and a vivid portrayal of human spirit in a time of suffering and survival.

Praise For Lost Names: Scenes from a Korean Boyhood…

"Lost Names is not a poem of hate, but a poem of love. . . . It is elegaic. It rises to moments of considerable dramatic power, but its finest moments, as when we see the cemeteries full of Koreans apologizing to their ancestors for having lost their names, are lyrical."
— New York Times

"The author's clear, evocative narrative describes a terrifying experience—foreign occupation. Its homely detail demonstrates how pervasive nationality is, and how painful any attempt to destroy it."
— New Yorker

"This memorable document of courage and endurance is written with clarity and vigor, pierced with moments of poignant love and the blazing resentment of the young."
— Saturday Review

Richard E. Kim (1932 - 2009) was a celebrated novelist, essayist, documentary filmmaker, and professor of literature at University of Massachusetts at Amherst, Syracuse University, San Diego State University, and at Seoul National University. He was founder and president of Trans-Lit Agency, a literary agency devoted to establishing international copyright for works being published in Korea. His books include The Martyred (nominated for the National Book Award), The Innocent , and Lost Koreans in China and the Soviet Union: Photo Essays . He was recipient of the Ford Foundation Foreign Area Fellowship, a Guggenheim Fellowship, and a National Endowment for the Arts Literary Fellowship.
Loading...
or support indie stores by buying on