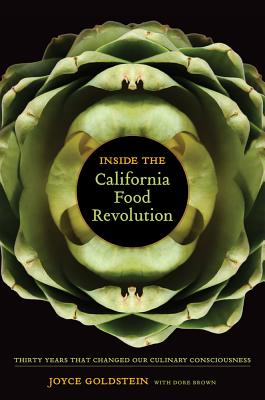 Inside the California Food Revolution

In this authoritative and immensely readable insider’s account, celebrated cookbook author and former chef Joyce Goldstein traces the development of California cuisine from its formative years in the 1970s to 2000, when farm-to-table, foraging, and fusion cooking had become part of the national vocabulary. Interviews with almost two hundred chefs, purveyors, artisans, winemakers, and food writers bring to life an approach to cooking grounded in passion, bold innovation, and a dedication to “flavor first.” Goldstein explains how the counterculture movement in the West gave rise to a restaurant culture characterized by open kitchens, women in leadership positions, and a surprising number of chefs and artisanal food producers who lacked formal training. The new cuisine challenged the conventional kitchen hierarchy and French dominance in fine dining, leading to a more egalitarian and informal food scene.

In weaving Goldstein’s views on California food culture with profiles of those who played a part in its development—from Alice Waters to Bill Niman to Wolfgang Puck—Inside the California Food Revolution demonstrates that, while fresh produce and locally sourced ingredients are iconic in California, what transforms these elements into a unique cuisine is a distinctly Western culture of openness, creativity, and collaboration. Engagingly written and full of captivating anecdotes, this book shows how the inspirations that emerged in California went on to transform the experience of eating throughout the United States and the world.

Praise For Inside the California Food Revolution: Thirty Years That Changed Our Culinary Consciousness (California Studies in Food and Culture #44)…

"Goldstein convincingly presents a case for California cuisine as a vital force in strengthening connections among food, chefs and diners in ways that have transcended region."
— Kirkus Reviews

"An engaging history of a culinary revolution that has had enormous influence over the entire country."
— Library Journal

"When the time came for a definitive record of California cooking, UC Press knew the exact person to pen it. After almost 200 interviews with chefs, critics, food artisans, iconoclast winemakers and restauranteurs, the doyenne has tracked a 30-year shift in design, casualization and style."
— C Magazine

"A book for anyone who loves to eat and who wants to understand why eating has gotten so delicious."
— Miriam Morgan

"As a chef and writer, Joyce brings an insider’s eye to chronicling the shift to local, foraged, farm-to-table, and fusion cooking. If you want to fill in what you missed and where Californian cuisine is heading next, read about it."
— Super Chef Blog


"A lot of interesting anecdotes. . . . Indeed, for anyone who wonders what those wild early days were all about, 'Inside the California Food Revolution' will be a valuable resource."
— Los Angeles Times Daily Dish

"Insightful and compelling . . . . As engaging as it is educational."
— Restaurant Hospitality

"Lively history told by someone who was part of it always makes for the most engaging books, and award-winning restaurateur and author Joyce Goldstein certainly qualifies as one in the vanguard of a culinary revolution no one saw coming in America--and certainly not in California--that transformed the way Americans eat."
— Mariani's Virtual Gourmet Newsletter


"Lively history told by someone who was part of it always makes for the most engaging books, and award-winning restaurateur and author Joyce Goldstein certainly qualifies as one in the vanguard of a culinary revolution no one saw coming in America--and certainly not in California--that transformed the way Americans eat."
— Mariani's Virtual Gourmet Newsletter

"...This volume is highly readable and a valuable introductions to an event that has changed American views about food and eating."
— DM Gilbert

Joyce Goldstein was chef and owner of the groundbreaking restaurant Square One in San Francisco. She received the James Beard Award for Best Chef in California and the Lifetime Achievement Award from Women Chefs and Restaurateurs. She is the author of twenty-six cookbooks, and her writing appears in the San Francisco Chronicle, Sommelier Journal, Fine Cooking, and many other publications.

Dore Brown is Principal Editor at University of California Press.