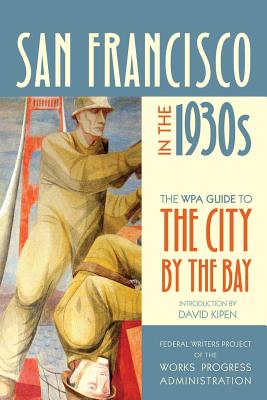 San Francisco in the 1930s (Paperback)

The WPA Guide to the City by the Bay

By Federal Writers Project of the Works Progress Administration, David Kipen (Introduction by)

“San Francisco has no single landmark by which the world may identify it,” according to San Francisco in the 1930s, originally published in 1940. This would surely come as a surprise to the millions who know and love the Golden Gate Bridge or recognize the Transamerica Building’s pyramid. This invaluable Depression-era guide to San Francisco relates the city’s history from the vantage point of the 1930s, describing its culture and highlighting the important tourist attractions of the time. David Kipen’s lively introduction revisits the city’s literary heritage—from Bret Harte to Kenneth Rexroth, Jade Snow Wong, and Allen Ginsberg—as well as its most famous landmarks and historic buildings. This rich and evocative volume, resonant with portraits of neighborhoods and districts, allows us a unique opportunity to travel back in time and savor the City by the Bay as it used to be.

The Federal Writers Project (FWP) of the Works Progress Administration (WPA) not only provided jobs and income to writers during the Depression, it created for America an astounding series of detailed and richly evocative guides, recounting the stories and histories of the 48 states (plus Alaska Territory and Puerto Rico) and many of the country’s major cities. David Kipen served for five years as Director of Literature at the National Endowment for the Arts, where he led the Big Read initiative, and for seven years as book editor and book critic of the San Francisco Chronicle. He is the author of The Schreiber Theory: A Radical Rewrite of American Film History and translator of Cervantes’ The Dialogue of the Dogs.

Praise For San Francisco in the 1930s: The WPA Guide to the City by the Bay…

“Reading both is like finding hidden treasures. The San Francisco edition is a must have for anyone interested in the city. . . . The San Francisco and Los Angeles guidebooks offer both traditional tours of the city as well as historical writing more closely akin to poetry. These are books that people can read aloud to one another.”
— Beyondchron

“More than just a tool to help you find the nearest Presbyterian church or a convenient tennis court, the guides, part of the Depression-era Federal Writers Project, included thoughtful essays on history, life and culture in each destination, as well as blow-by-blow tours through city neighborhoods and other information that in many cases remains at least partially relevant (or interesting) today.“
— New York Post

“A useful book as well as an important historical volume.”
— Foreword