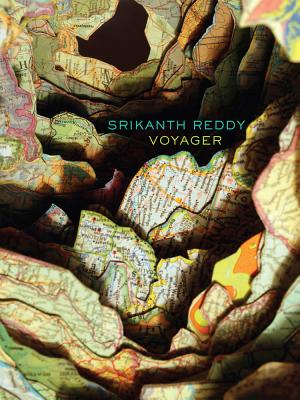 Srikanth Reddy’s second book of poetry probes this world’s cosmological relation to the plurality of all possible worlds. Drawing its name from the spacecraft currently departing our solar system on an embassy to the beyond, Voyager unfolds as three books within a book and culminates in a chilling Dantean allegory of leadership and its failure in the cause of humanity. At the heart of this volume lies the historical figure of Kurt Waldheim—Secretary-General of the U.N. from 1972-81 and former intelligence officer in Hitler’s Wehrmacht—who once served as a spokesman for humanity while remaining silent about his role in the collective atrocities of our era. Resurrecting this complex figure, Reddy’s universal voyager explores the garden of forking paths hidden within every totalizing dream of identity.

Srikanth Reddy is Assistant Professor of English at the University of Chicago and the author of a previous collection of poetry, Facts for Visitors.

“These recastings form a highly ambitious book of political poetry that speaks hauntingly of our world.”
— Publishers Weekly

“Through Reddy’s ‘erasures’ and the negative capabilities of his excavated text we feel, even if we cannot see, what’s missing, what’s gone—into outer space, into self-denial, into the ironies of history and of the role between the wielders of pens and of swords. We find ourselves—culpable, impressionable, alive—in the human space he has created.”
— Chronicle Of Higher Education

“Reddy has fashioned an arresting, very personal voice by committing himself to using only words and phrases that appeared in—wait for it—Kurt Waldheim’s memoirs. . . . Reddy is so gifted that the poems, despite their weighty origins, soar.”
— Dan Chiasson

“Voyager is a nuanced and haunting book of geopolitical, literary, moral, and spiritual inquiry.”
— WBEZ-FM