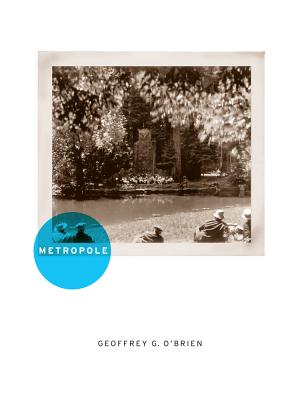 Geoffrey G. O’Brien’s third collection opens with a set of lyric experiments whose music and mutable syntax explore the social relations concealed in material things. O’Brien’s poems measure the “vague cadence” of daily life, testing both the value and limits of art in a time of vanishing publics and permanent war. The long title poem, written in a strict iambic prose, charts the disappearance of the poetic into the prosaic, of meter into the mundane, while reactivating the very possibilities it mourns: O’Brien’s prosody invests the prose of things with the intensities of verse. In the charged space of this hybrid form, objects become subjects and sense pivots mid-sentence into song: “The sun revolves around the earth revolves around the sun.”

“The New California Poetry series has served poetry as Silicon Valley serves the software industry, offering consistent innovation, and O’Brien’s Metropole is one of the best of their books.”
— Ed Skoog

“Ambitious and highly self-conscious poems. . . . If O'Brien's poems are becoming increasingly resistant to, if not combative with, their readers, their rewards are also growing richer for readers willing to engage in the poems' arguments.“
— Publishers Weekly