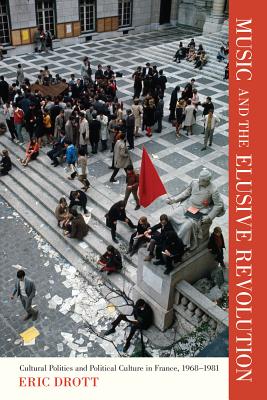 Music and the Elusive Revolution

In May 1968, France teetered on the brink of revolution as a series of student protests spiraled into the largest general strike the country has ever known. In the forty years since, May ’68 has come to occupy a singular place in the modern political imagination, not just in France but across the world. Eric Drott examines the social, political, and cultural effects of May ’68 on a wide variety of music in France, from the initial shock of 1968 through the “long” 1970s and the election of Mitterrand and the socialists in 1981. Drott’s detailed account of how diverse music communities developed in response to 1968 and his pathbreaking reflections on the nature and significance of musical genre come together to provide insights into the relationships that link music, identity, and politics.

Praise For Music and the Elusive Revolution: Cultural Politics and Political Culture in France, 1968–1981 (California Studies in 20th-Century Music #12)…

“An impressive work of admirable erudition.”
— H-France Review Of Books

Eric Drott is Associate Professor of Music at the University of Texas.
Loading...
or support indie stores by buying on