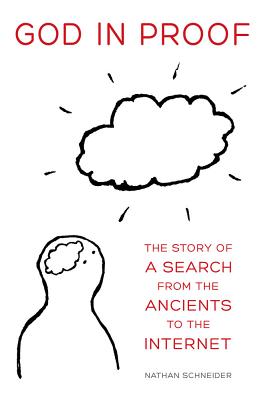 The Story of a Search from the Ancients to the Internet

In this tour of the history of arguments for and against the existence of God, Nathan Schneider embarks on a remarkable intellectual, historical, and theological journey through the centuries of believers and unbelievers--from ancient Greeks, to medieval Arabs, to today's most eminent philosophers and the New Atheists. Framed by an account of Schneider's own unique journey, God in Proof illuminates the great minds who wrestled with one of history's biggest questions together with their arguments, bringing them to life in their time, and our own. Schneider's sure-handed portrayal of the characters and ideas involved in the search for proof challenges how we normally think about doubt and faith while showing that, in their quest for certainty and the proofs to declare it, thinkers on either side of the God divide are often closer to one another than they would like to think.

Nathan Schneider's writing about religion and reason has appeared in Harper's, The New York Times, The Boston Globe, The Guardian, The Chronicle of Higher Education, Commonweal, and Religion Dispatches, among other publications. He is an editor of Killing the Buddha, an online magazine about religion and culture.
Loading...
or
Not Currently Available for Direct Purchase