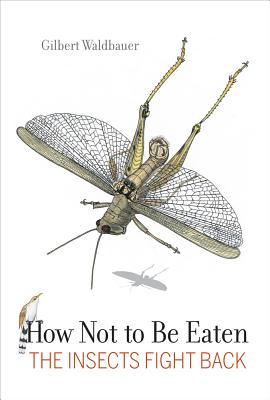 How Not to Be Eaten

The Insects Fight Back

All animals must eat. But who eats who, and why, or why not? Because insects outnumber and collectively outweigh all other animals combined, they comprise the largest amount of animal food available for potential consumption. How do they avoid being eaten? From masterful disguises to physical and chemical lures and traps, predatory insects have devised ingenious and bizarre methods of finding food. Equally ingenious are the means of hiding, mimicry, escape, and defense waged by prospective prey in order to stay alive. This absorbing book demonstrates that the relationship between the eaten and the eater is a central—perhaps the central—aspect of what goes on in the community of organisms. By explaining the many ways in which insects avoid becoming a meal for a predator, and the ways in which predators evade their defensive strategies, Gilbert Waldbauer conveys an essential understanding of the unrelenting coevolutionary forces at work in the world around us.

Praise For How Not to Be Eaten: The Insects Fight Back…

“At times this informative book turns wonderfully gross and lovely, reminding us that there’s an entire universe of largely unnoticed creatures all around us.”
— Audubon

“For the aspiring entomologist or amateur naturalist, there is much to appreciate in Waldbauer’s wonderland of astonishing behaviors and colorful creatures. And for the entomologist’s friends or family who don’t see what’s so great about the hexapod world, this book might be just the ticket. Its vivid stories are sure to inspire a closer attention to the small, everyday dramas playing out on spider webs, on flowers and all around us.”
— American Scientist

“Insects and their predators use a vast, often bizarre array of strategies to eat or to avoid being eaten. Entomologist Gilbert Waldbauer tours tactics on both sides, from sticky lures to kamikaze speed. His fascinating cast ranges from goatsuckers (birds in the order Caprimulgiformes) that can catch massive moths in their bristled gapes, to the brilliantly hued lubber grasshopper (Romalea guttata), which, when threatened, both vomits a noxious substance and hisses as stinking froth erupts from its thorax.”
— Nature

“This absorbing book demonstrates that the relationship between the eaten and the eater is a central—perhaps the central—aspect of what goes on in the community of organisms. By explaining the many ways in which insects avoid becoming a meal for a predator, and the ways in which predators evade their defensive strategies, Gilbert Waldbauer conveys an essential understanding of the unrelenting coevolutionary forces at work in the world around us.”
— The Guardian

“Readers will certainly come away with a renewed appreciation for the ways in which insects use mimicry, deceit and poison to survive.”
— Washington Post

“Waldbauer leads the reader on a fascinating journey through the escape and defense mechanisms of our six-legged friends. Written in an engaging style suited to anyone interested in science, biodiversity, behavior and adaptation, How Not to Be Eaten offers an interesting look at some of the most bizarre insects in the world, alongside largely unknown, fascinating morsels on some of the more familiar ones.”
— Times Higher Education

“A good source of information for lay people, young students, and those who have no knowledge of the insect world. Recommended.”
— CHOICE

“From burrowing owls that bait dung beetles with lures made from cow manure to the unicorn caterpillar, which sprays would-be attackers with a spritz of acid, the profusion of life in all its forms and finery flies in through the window on biology that Waldbauer opens wide.”
— The Scientist

“If animals could read, they might regard Waldbauer’s book as an insect analog to Sun Tzu’s classic Art of War, for it covers the tactics and the strategies of both offense (the predators) and defense (the insects) in an archetypal fight for survival. For us humans, it’s sufficient to enjoy this collection of well-told stories that illustrate the complex interrelations of species and the creative dynamics of evolution.”
— Natural History

“Fascinating. . . . How Not To Be Eaten is engaging in its descriptive and wide-ranging examples. . . . Waldbauer succeeds in highlighting the intense and captivating evolutionary arms race taking place among insects.”
— BioScience

Gilbert Waldbauer is Professor Emeritus of Entomology at University of Illinois. He is the author of eight books, including Fireflies, Honey, and Silk (UC Press), A Walk around the Pond, and What Good Are Bugs?
Loading...
or
Not Currently Available for Direct Purchase