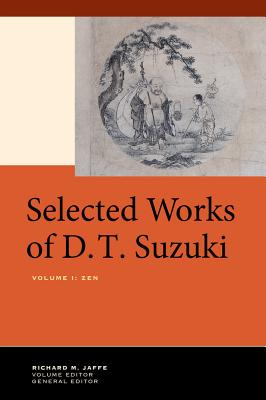 Daisetsu Teitaro Suzuki was a key figure in the introduction of Buddhism to the non-Asian world. Many outside of Japan encountered Buddhism for the first time through his writings and teaching, and for nearly a century his work and legacy have contributed to the ongoing religious and cultural interchange between Japan and the rest of the world, particularly the United States and Europe. Selected Works of D. T. Suzuki gathers the full range of Suzuki’s writings—both classic essays and lesser-known but equally significant articles. This first volume in the series presents a collection of Suzuki’s writings on Zen Buddhist thought and practice. In an effort to ensure the continued relevance of Zen, Suzuki drew on his years of study and practice, placing the tradition into conversation with key trends in nineteenth- and twentieth-century thought. Richard M. Jaffe’s in-depth introduction situates Suzuki’s approach to Zen in the context of modern developments in religious thought, practice, and scholarship. The romanization of Buddhist names and technical terms has been updated, and Chinese and Japanese characters, which were removed from many post–World War II editions of Suzuki’s work, have been reinstated. This will be a valuable edition of Suzuki’s writings for contemporary scholars and students of Buddhism.

Praise For Selected Works of D.T. Suzuki, Volume I: Zen…

"Jaffe’s excellent introduction places Suzuki’s writings in the contexts of modern developments in religious thought, practice, and scholarship in such a way as to make crystal clear the relevance of Suzuki’s interpretation of Zen for contemporary Buddhist scholarship. . . . Recommended."
— CHOICE Connect

Daisetsu Teitaro Suzuki (1870–1966) was a Japanese-born scholar and translator who over the course of the twentieth century came to be regarded as one of the leading authorities on Zen Buddhism. He was the author of more than a hundred works on the subject in both Japanese and English and was instrumental in bringing the teachings of Zen and other forms of Buddhism to the attention of the Western world. His many books in English include An Introduction to Zen Buddhism, Essays in Zen Buddhism, Living by Zen, Zen and Japanese Culture, Mysticism: Christian and Buddhist, and Shin Buddhism.

Richard M. Jaffe is Associate Professor of Religious Studies at Duke University and the author of Neither Monk nor Layman: Clerical Marriage in Modern Japanese Buddhism.