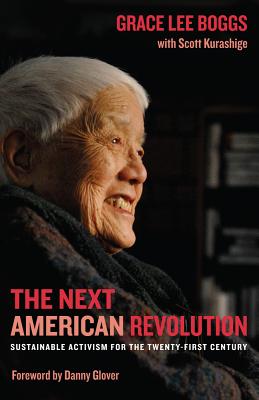 The Next American Revolution

Sustainable Activism for the Twenty-First Century

A world dominated by America and driven by cheap oil, easy credit, and conspicuous consumption is unraveling before our eyes. In this powerful, deeply humanistic book, Grace Lee Boggs, a legendary figure in the struggle for justice in America, shrewdly assesses the current crisis--political, economical, and environmental--and shows how to create the radical social change we need to confront new realities. A vibrant, inspirational force, Boggs has participated in all of the twentieth century's major social movements--for civil rights, women's rights, workers' rights, and more. She draws from seven decades of activist experience, and a rigorous commitment to critical thinking, to redefine "revolution" for our times. From her home in Detroit, she reveals how hope and creativity are overcoming despair and decay within the most devastated urban communities. Her book is a manifesto for creating alternative modes of work, politics, and human interaction that will collectively constitute the next American Revolution.

Grace Lee Boggs, the recipient of many human rights and lifetime achievement awards, is an activist, writer, and speaker. She is celebrated in the National Women's Hall of Fame. Boggs is the coauthor, with James Boggs, of Revolution and Evolution in the Twentieth Century and the author of Living for Change: An Autobiography. The daughter of Chinese immigrants, she is 95 years old. Scott Kurashige is Associate Professor at the University of Michigan and author of The Shifting Grounds of Race: Black and Japanese Americans in the Making of Multiethnic Los Angeles.
Loading...
or
Not Currently Available for Direct Purchase