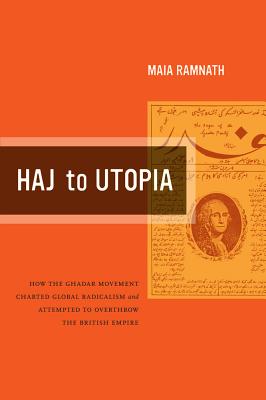 In The Haj to Utopia, Maia Ramnath tells the dramatic story of Ghadar, the Indian anticolonial movement that attempted overthrow of the British Empire. Founded by South Asian immigrants in California, Ghadar—which is translated as “mutiny”—quickly became a global presence in East Asia, Europe, the Middle East, and East Africa. Ramnath brings this epic struggle to life as she traces Ghadar’s origins to the Swadeshi Movement in Bengal, its establishment of headquarters in Berkeley, California, and its fostering by anarchists in London, Paris, and Berlin. Linking Britain’s declaration of war on Germany in 1914 to Ghadar’s declaration of war on Britain, Ramnath vividly recounts how 8,000 rebels were deployed from around the world to take up the battle in Hindustan. The Haj to Utopia demonstrates how far-flung freedom fighters managed to articulate a radical new world order out of seemingly contradictory ideas.