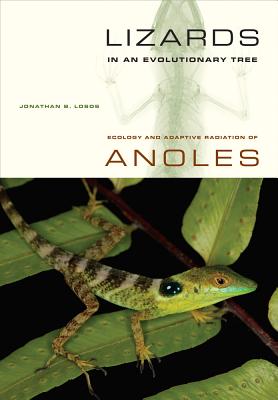 Lizards in an Evolutionary Tree

Ecology and Adaptive Radiation of Anoles (Organisms and Environments #10)

Adaptive radiation, which results when a single ancestral species gives rise to many descendants, each adapted to a different part of the environment, is possibly the single most important source of biological diversity in the living world. One of the best-studied examples involves Caribbean Anolis lizards. With about 400 species, Anolis has played an important role in the development of ecological theory and has become a model system exemplifying the integration of ecological, evolutionary, and behavioral studies to understand evolutionary diversification. This major work, written by one of the best-known investigators of Anolis, reviews and synthesizes an immense literature. Jonathan B. Losos illustrates how different scientific approaches to the questions of adaptation and diversification can be integrated and examines evolutionary and ecological questions of interest to a broad range of biologists.

Praise For Lizards in an Evolutionary Tree: Ecology and Adaptive Radiation of Anoles (Organisms and Environments #10)…

“A rich compendium of information by an extraordinarily insightful biologist.”
— Science (AAAS)

“This wonderful book will appeal to all ecologists and evolutionary biologists interested in the causes of species diversity.”
— Trends In Ecology & Evolution

“A must read for new researchers in the field.”
— Evolution: Intl Journal Of Organic Evolution

“Succeeds on all fronts.”
— Bioscience

“This apparent labor of love . . . will most likely become an academic favorite that will be well used by many.”
— Qtly Review Of Biology

“Represents a rich compendium of information by an extraordinarily insightful biologist with a deep and broad understanding of the diversity of Anolis lizards in the Caribbean.”
— Science (AAAS)

Jonathan B. Losos is a Monique and Philip Lehner Professor for the Study of Latin America and Curator of Herpetology at the Museum of Comparative Zoology at Harvard University. He is a newly elected member of the American Academy of Arts and Sciences, and a recent recipient of the esteemed Daniel Giraud Elliot Medal. Losos is recognized for his novel and penetrating evolutionary studies of adaptive radiation in vertebrates, notably his comprehensive study of Anolis lizards in tropical America, as summarized in his recent book, Lizards in an Evolutionary Tree: Ecology and Adaptive Radiation of Anoles.
Loading...
or support indie stores by buying on